Home
/
Backyard Ideas
/
Backyard Shed Turned Workshop
With as many projects as DIYers take on, an open space to complete them is necessary. With the help of The Home Depot, Linn of Darbin Orvar built a backyard shed not too long ago, and now she is starting to turn it into a workshop by completing the first step: installing new windows.

I have a small backyard shed, which I think could be better served as a finished building. I’m planning to use it as a workshop, however I could also imagine how functional it would be as an office, or a guest space! There are quite a lot of things that need to be upgraded in order to make it a “finished” space. Windows being a pretty important part. 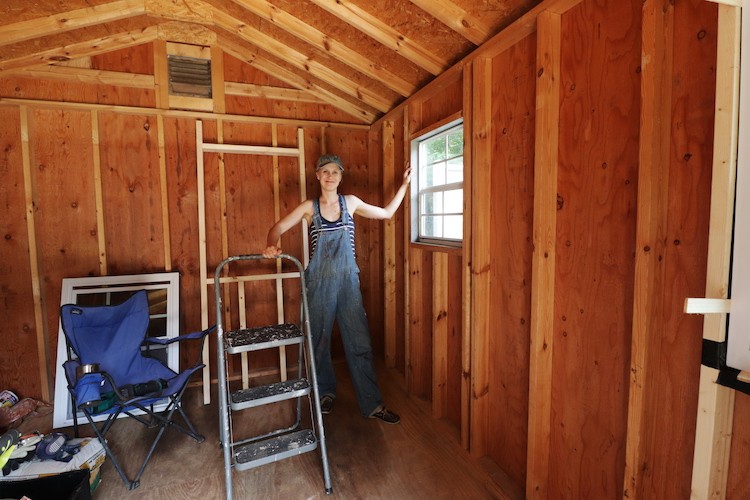 The old backyard shed had two shed-style windows already, which were very flimsy and single-paned. To make the space brighter and more energy efficient, I decided to switch out those windows for brand new ones. Plus, I added two additional ones, for a total of four windows for this small 140 square foot shop. I picked the same 28×38 inch windows all around. I also decided to install a new door with a window inside, which brings the total to five windows! 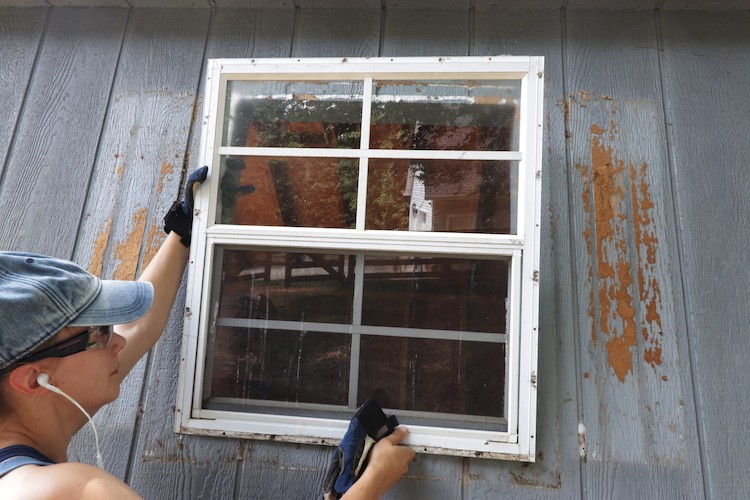 The first step in the process was to remove the old windows and add new framing. The shed has t1-11 siding, which means the siding and the sheathing is the same product. I didn’t want to replace the siding, if possible, so that meant being very careful when removing the windows, and the studs which I wouldn’t be able to incorporate with this new design. I used a reciprocating saw to cut through the nails attaching the studs to the siding. 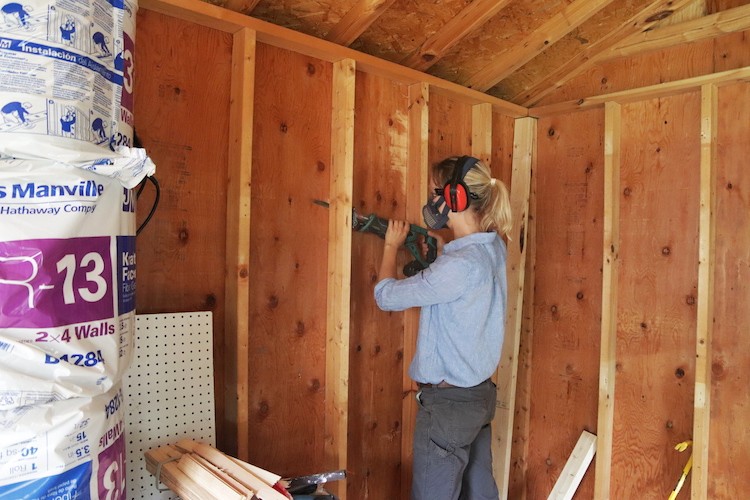 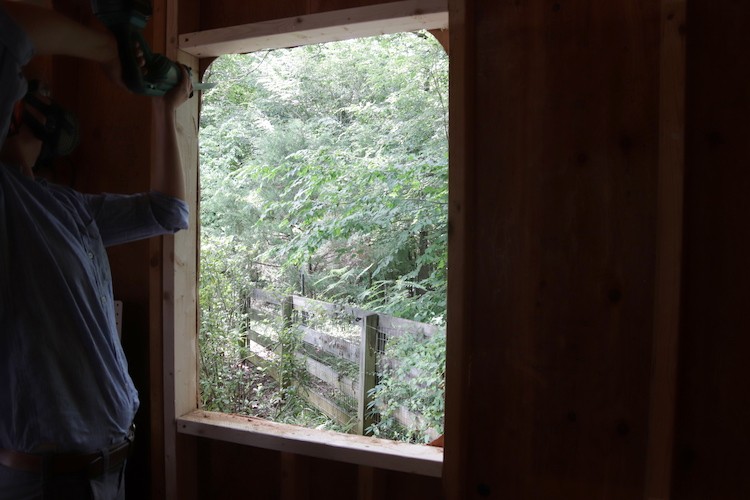 The windows were easy to remove, as they were simply screwed in from the front, and stuck in place with caulk. Once I had removed the windows and the studs, it was time to add new framing. I began with cutting up 2x4s on the miter saw, and then I screwed the new frames in place.

Once the framing was completed, it was time to install the new windows. The first step in that process, is taping the opening. When you install a window, you want to make sure that if any moisture would enter in between the window and the siding, it drains the correct way . This is so it doesn’t get trapped inside the wall. In order to do that, I began with taping the bottom of the window opening. Then going up the sides, and finally taping the top. 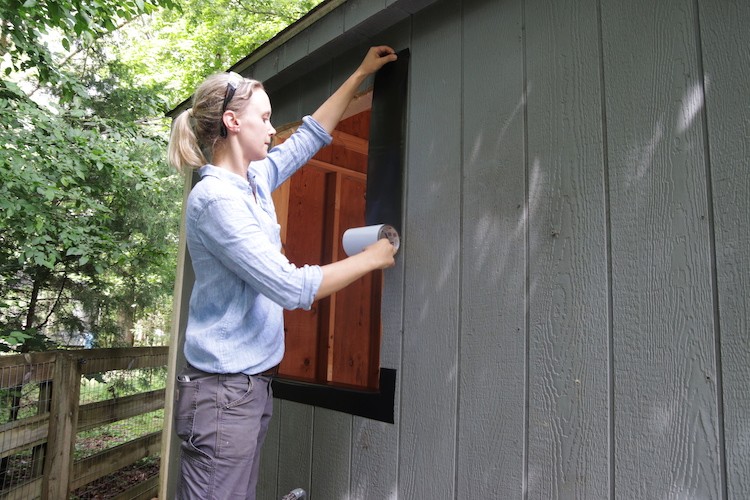 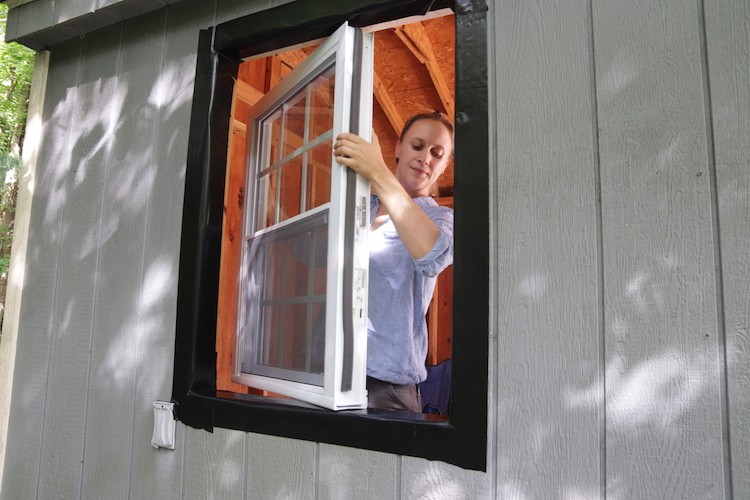 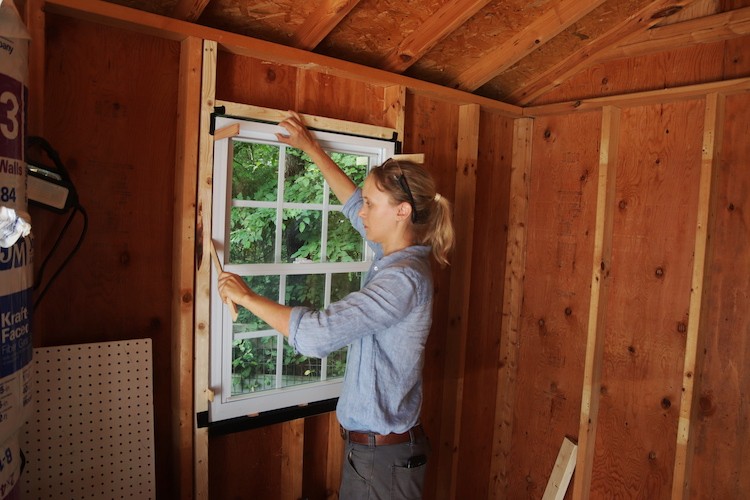 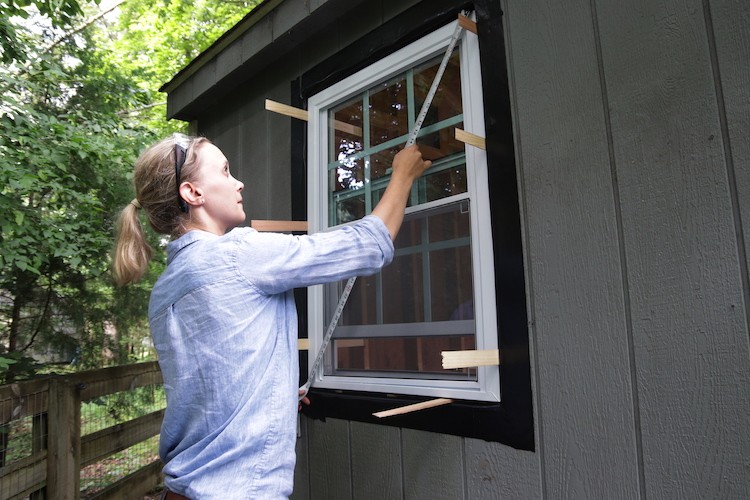 When all of these steps were taken, I began screwing the window in place through the sides on the inside. The added three screws on each side, which secured the window nicely.

I taped the outside of the window. Making sure to leave the bottom open, so that water will be able to drain if necessary. The same principle remains as before. I started taping the sides, and finally taping the top section, going in about ½ inch on the window. The tape will later on be covered by trim, so it won’t be visible. 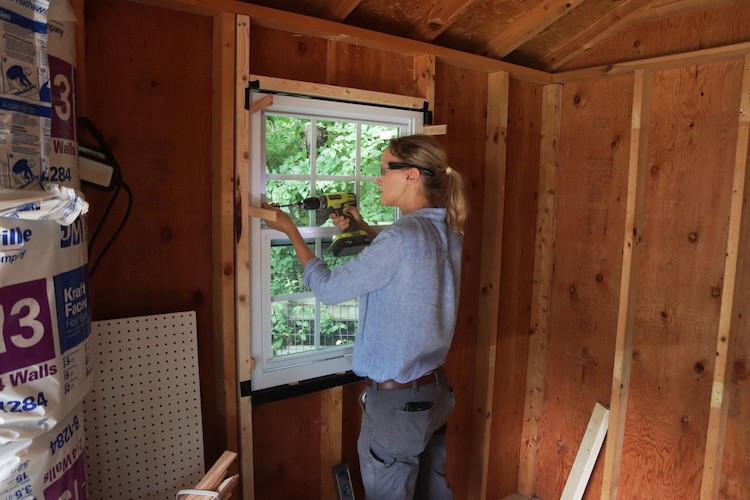 It’s amazing what a difference some real windows adds to the space! The building suddenly feels a lot more “real” and less backyard shed-like! There are many things left to do in this process, including trim work, siding, painting, electrical, flooring, drywall etc… but I’m glad I’m done with the windows! Suddenly there’s a lot more light in this space, and it’s starting to come together really nicely.