Stacy Risenmay of Not Just a Housewife recently re-designed her son’s bedroom. For the new space, Stacy built a custom modern loft bed.

Find out how you can recreate this look in six simple steps! 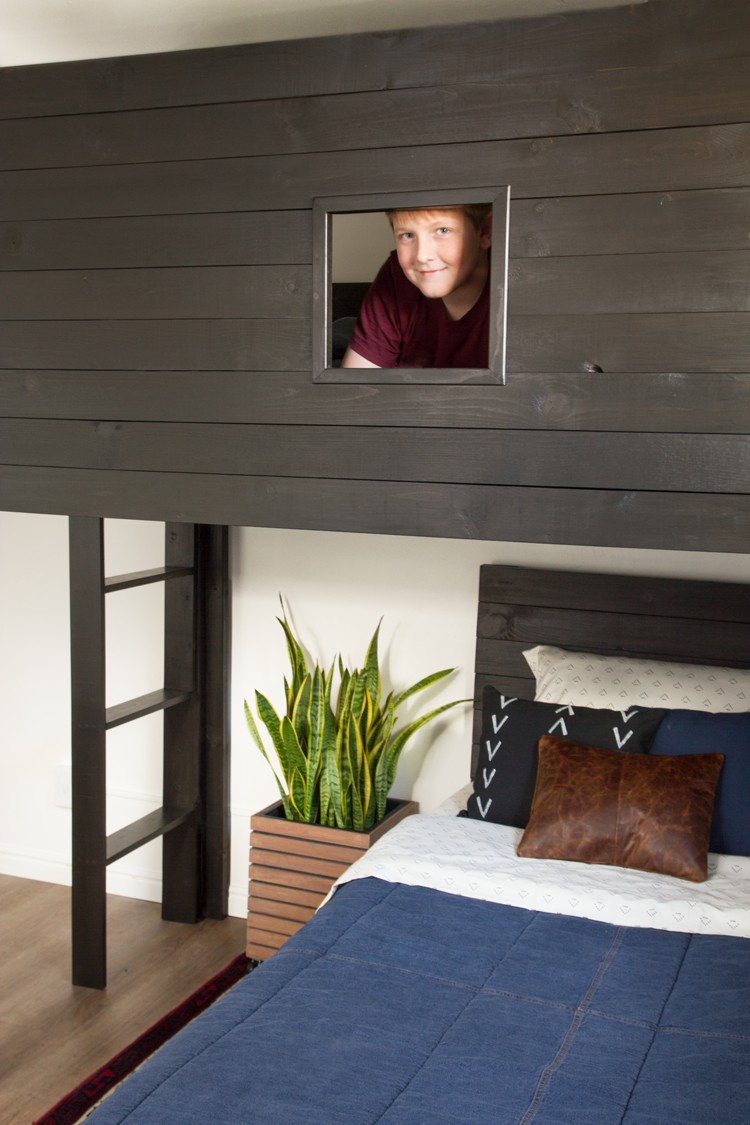 When I was planning this bedroom makeover I knew that my two boys, that are 16 and 10, would be sharing the space. They both love music and like the same colors, but I worried the age gap would be hard to address. My oldest wanted a modern, urban feel, and my 10-year-old wanted a fort for a bed. Most fort beds I have seen are rustic and sometimes resemble a cabin or treehouse. The question was: how do I mesh the fort idea with the modern feel my teenager was wanting? I came up with this modern loft bed and both my sons couldn’t be happier!

It was a fairly simple build. 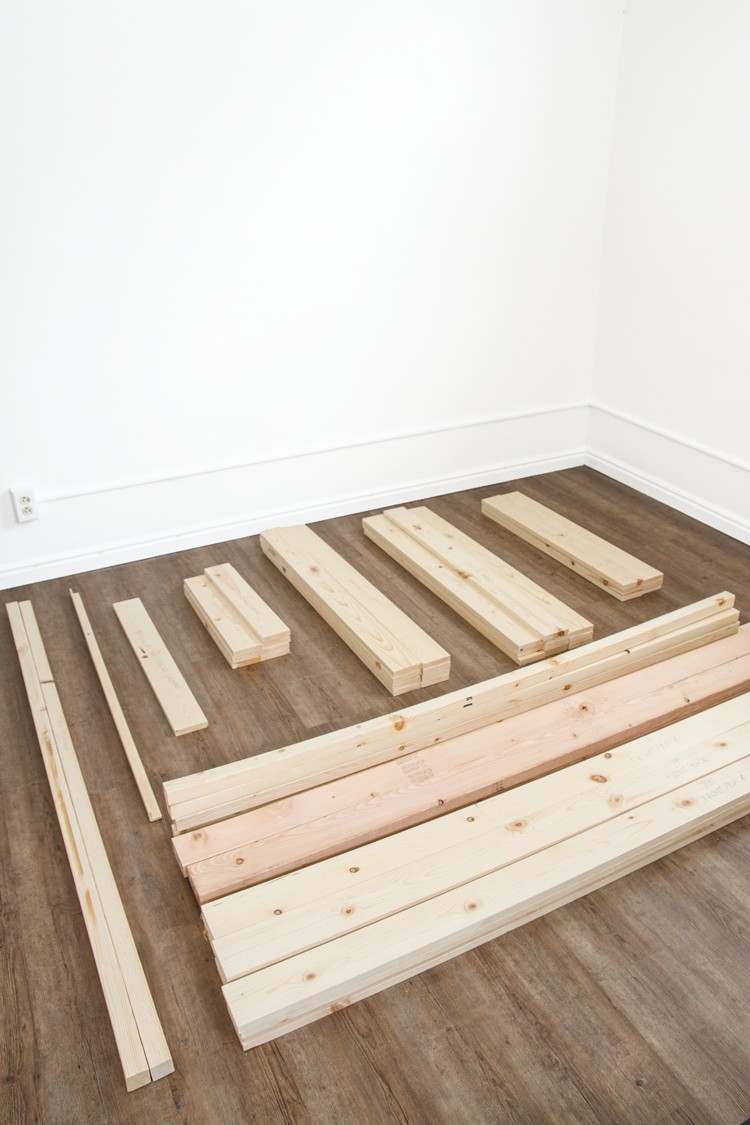 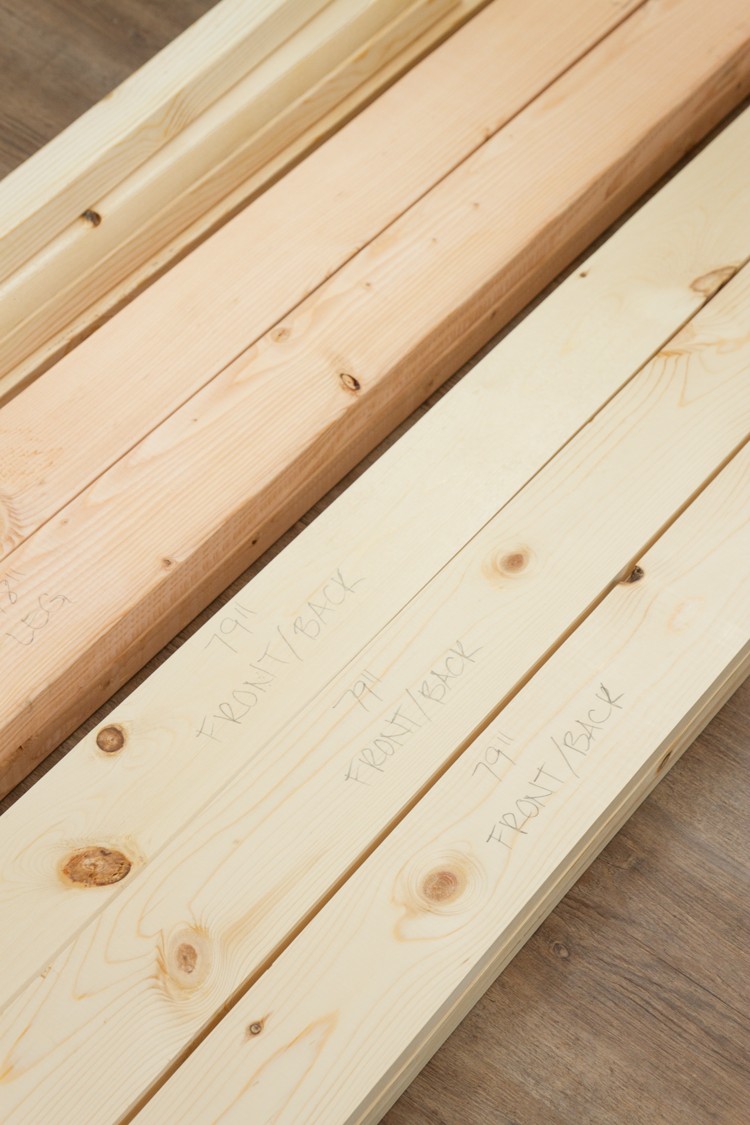 Because there were so many pieces, I labeled them with pencil as I cut them. 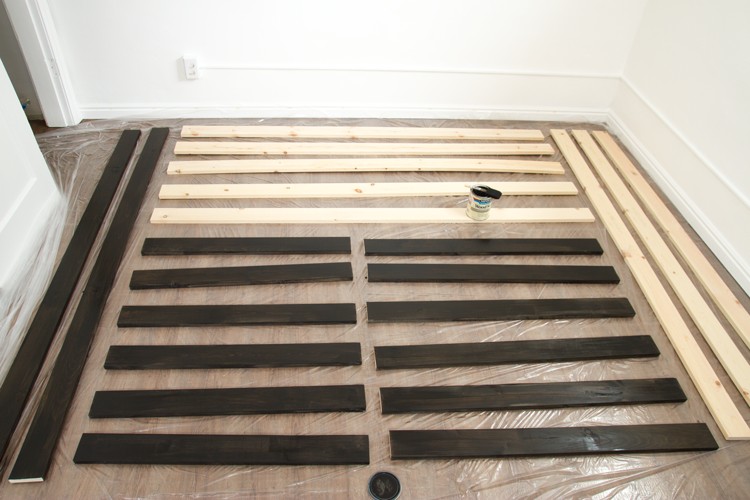 After sanding all the pieces, I added one coat of Minwax Classic Black water-based stain. 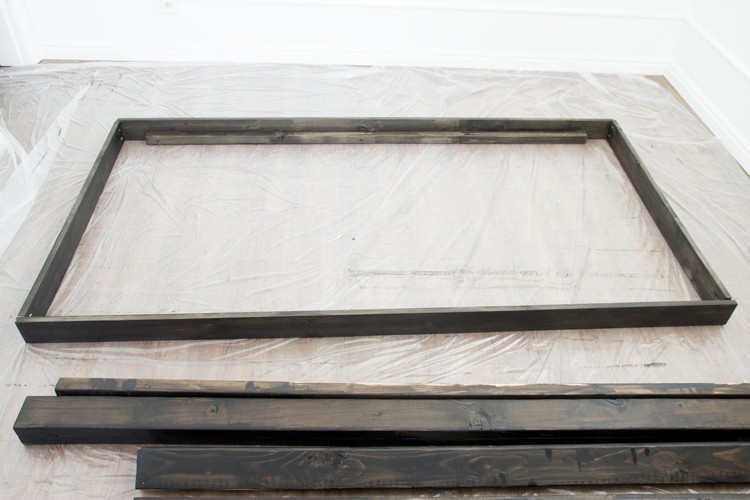 The 70-in. 2 x 2 boards were attached to two of the 79-in. boards using screws and wood glue. These will be the rails that the mattress slats will rest. I attached those two 79-in. boards and two 41-in. boards together using pocket holes. 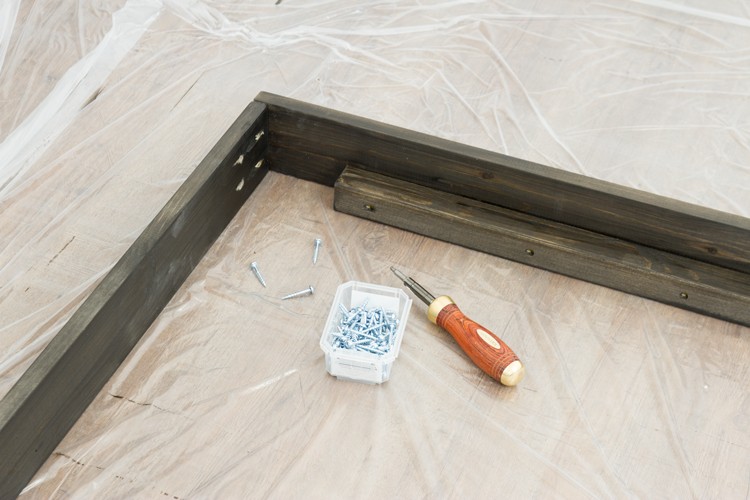 To create the legs, I attached 2 x 2 to 2 x 4’s making an L shape. I did this using screws and wood glue. I sunk the screws heads and puttied over them before staining.

Because there is an air vent on the wall, I made the back of this bed shorter, so it wouldn’t cover it. You can make this bed the same height in the front and back if you want.

Now that the base and the legs are assembled, it is time to join them together. I used six screws per leg. 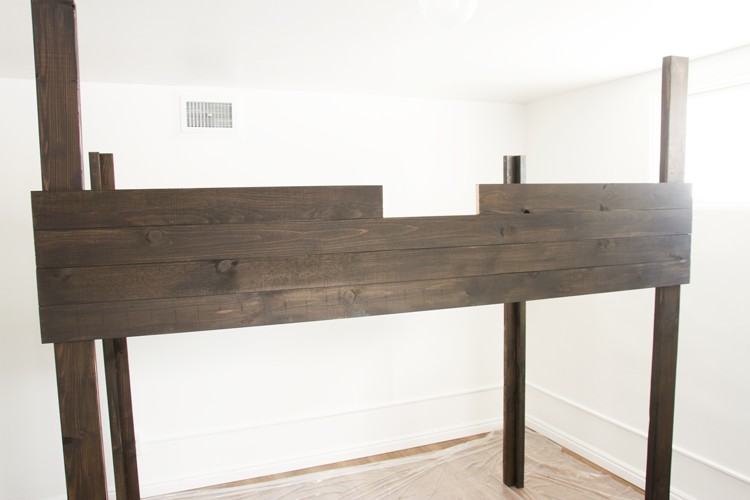 Now it is time to start adding the front pieces. Start with 79-in. pieces and then in the middle add the 33½-in. pieces to form an opening for the window. Then finish it off with more 79-in. pieces. 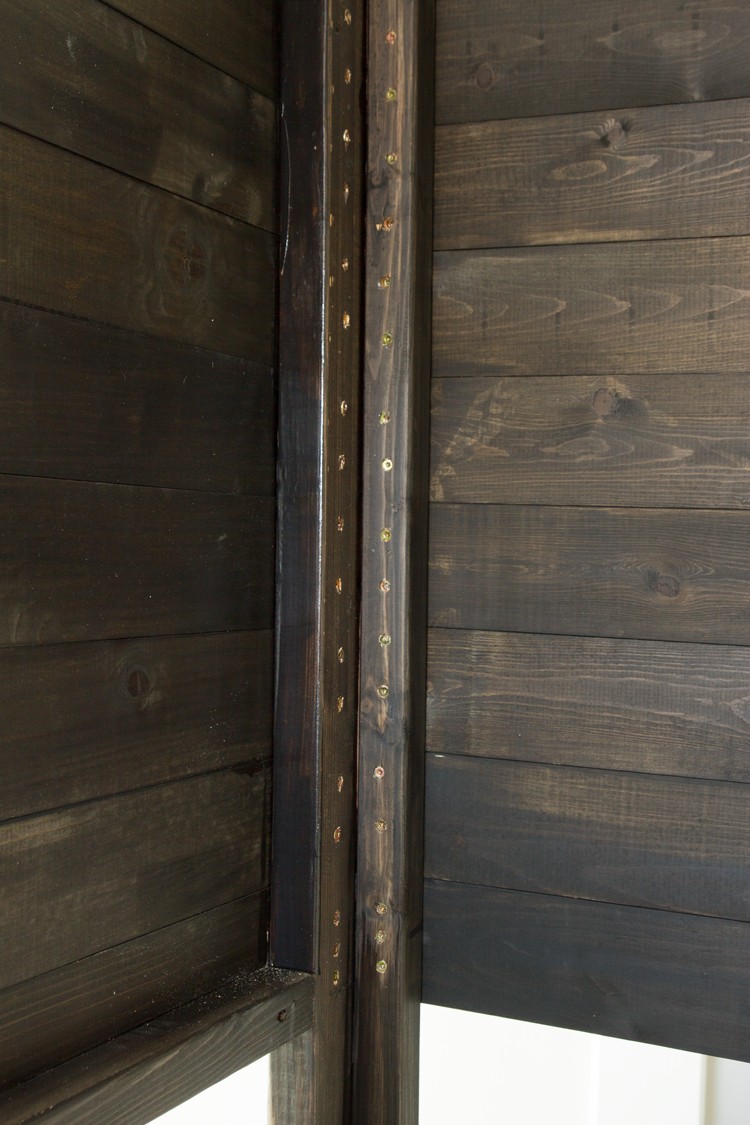 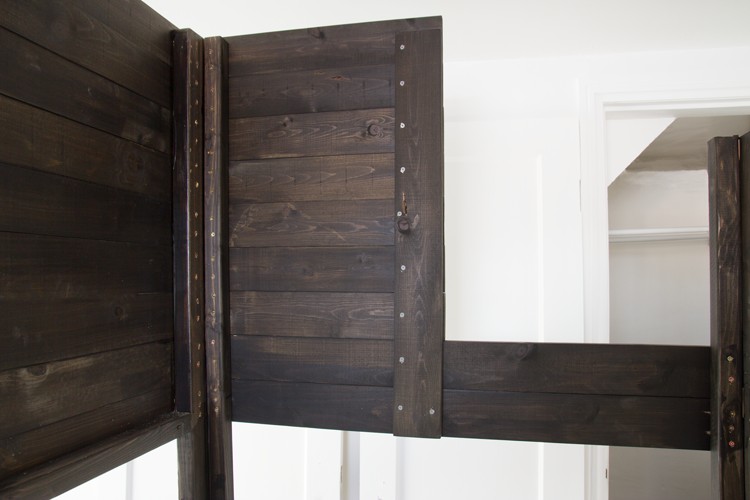 On the end with the 20-in. boards, you will need to add the 30-in. board vertically to hold the ends in place.

On the other side of the opening you will need to add the 2¾ in. 1 x 4 boards to give it a finished look. 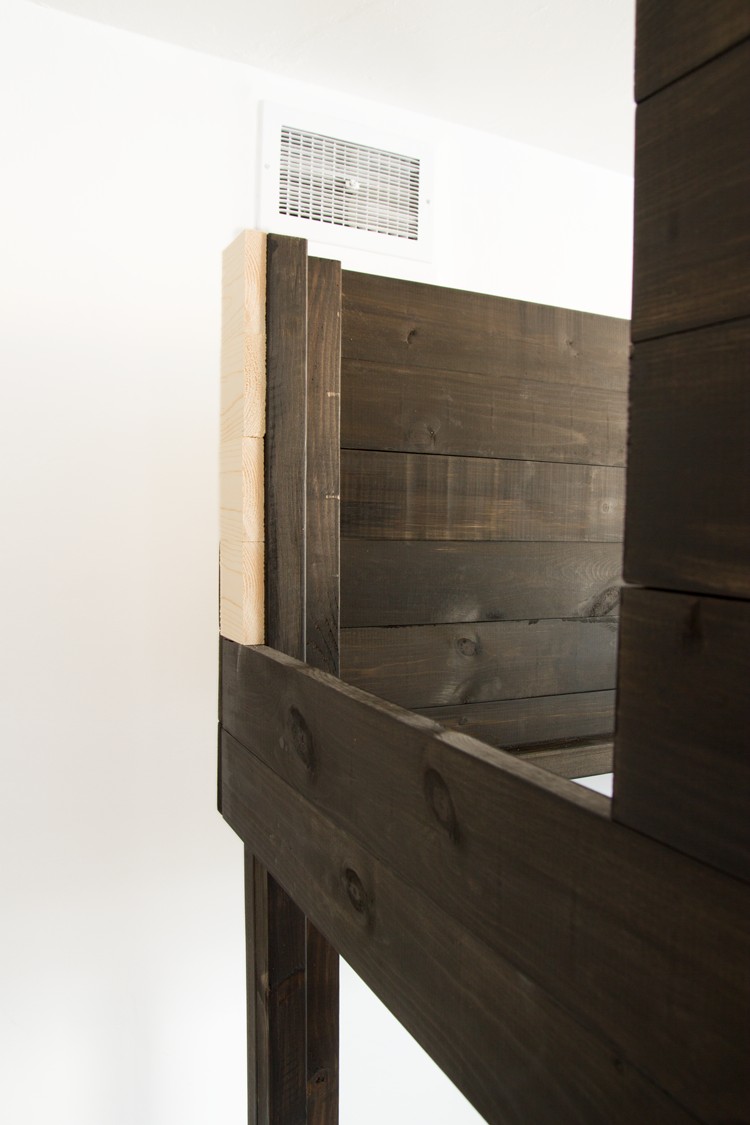 The 54- and 18-in. pieces will become the ladder. I attached them with screws and wood glue. I sunk the heads of the screws and puttied over them before staining. 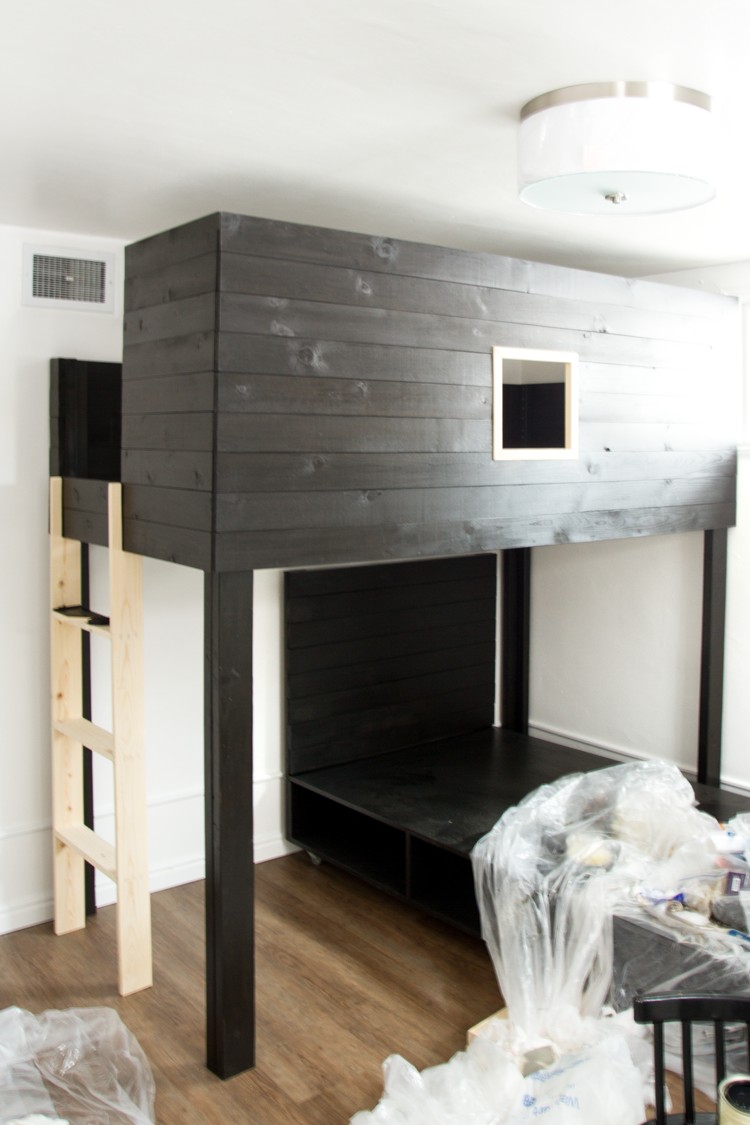 The outside corner trim will be cut at a 45° angle (like a picture frame) and will get nailed on the window. Putty the nail holes and then stain. 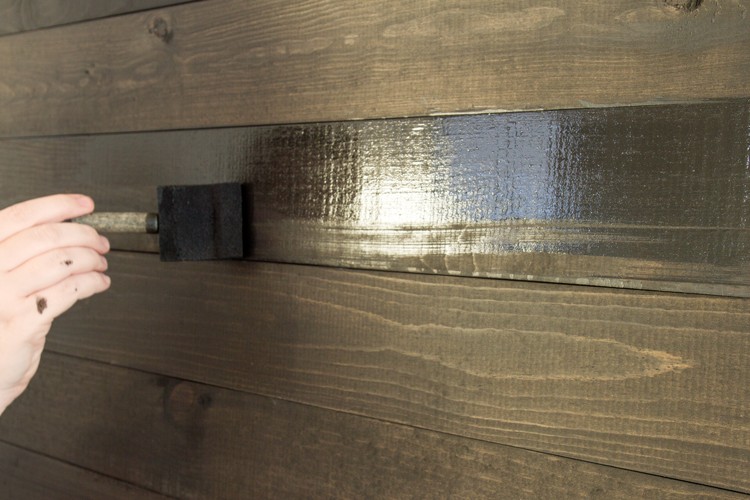 Once complete, I added a second coat of stain to all visible areas.

Add the 41-in. mattress slats and then the mattress. Because of our low basement ceiling, it was easier to put the mattress over the back (which was lower) before putting the bed into place. You can also put it up through the bottom, keep it slanted, add the slats, and then lay the mattress down. 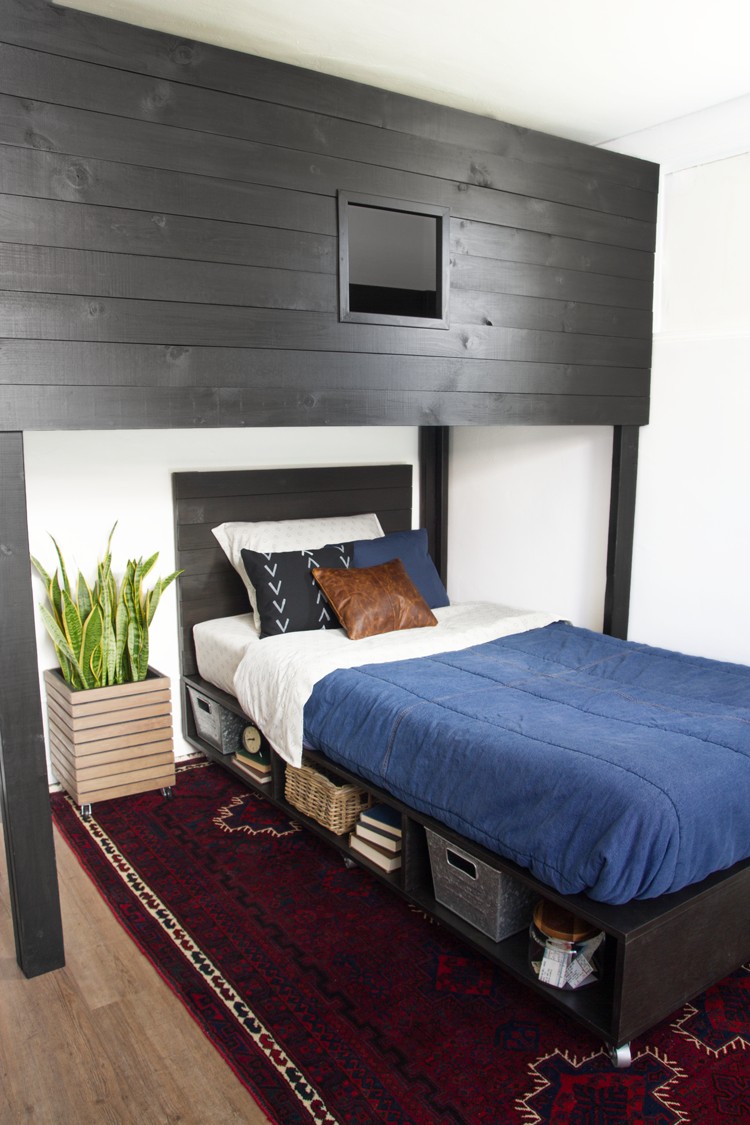 My son was over the moon! It fulfilled all his requirements for the perfect bed and it fit in with the style of the rest of the space.

Find the tutorial for the modern bed with storage on The Home Depot Blog here.

Check out other bedroom ideas on The Home Depot Blog. Shop lumber and building materials to build your own DIY modern loft bed at The Home Depot.