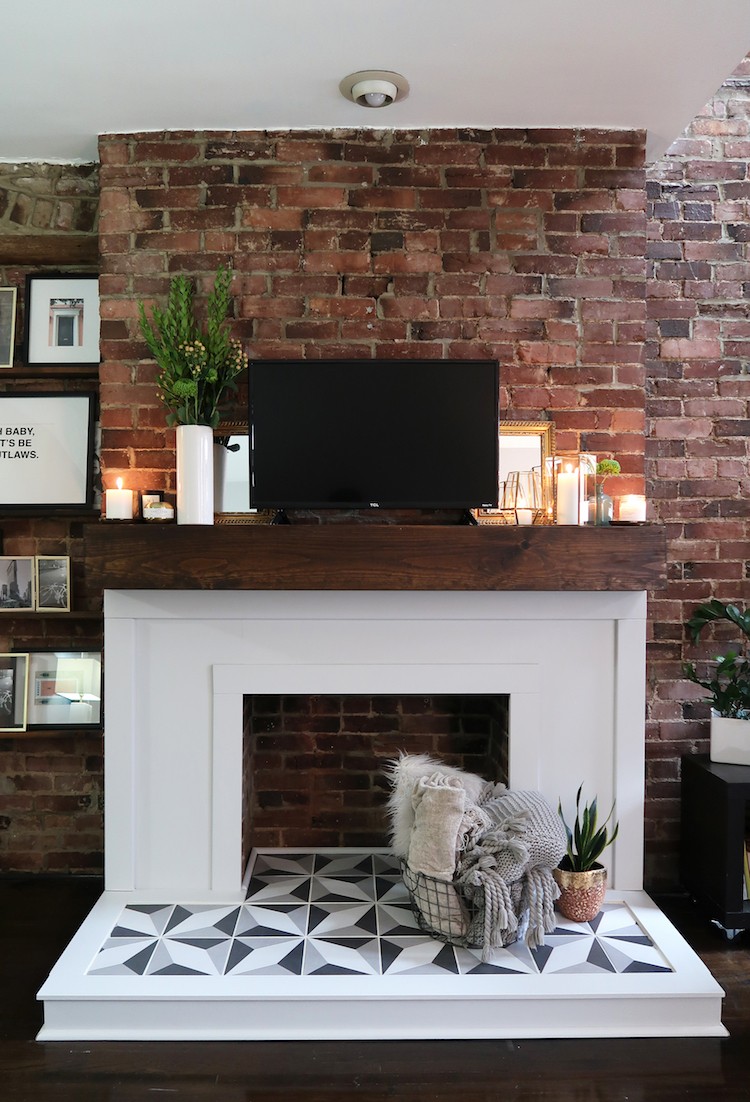 Jessica Steele of The Steele Maiden dreamed of redoing her living room fireplace. In a few simple steps, Jessica transformed her plain fireplace into a stylish focal point.

When we found this apartment with a decorative brick fireplace, it felt like we’d hit the Manhattan real estate jackpot. However, since the exposed brick covers both the fireplace and the entire length of the living room – it started to feel a bit visually heavy. And so, my little dream of a fireplace makeover began. 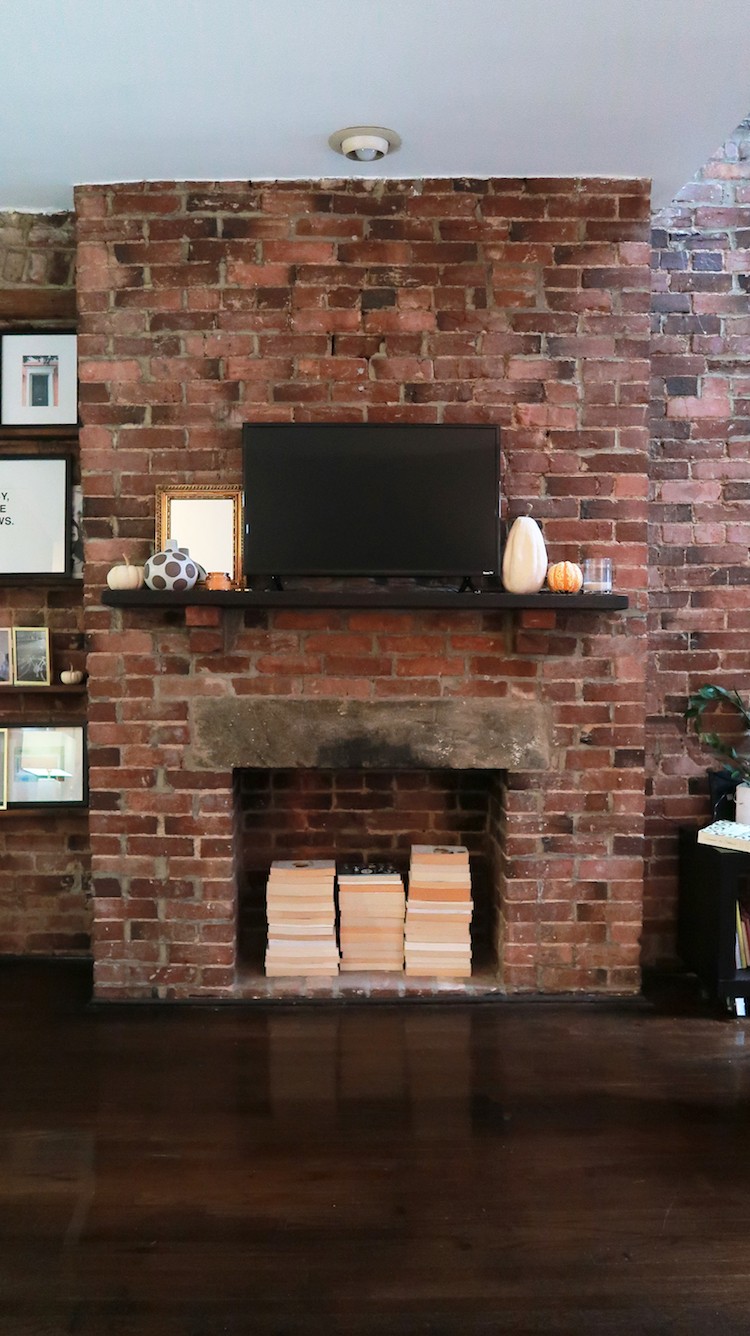 To start, I had to hone in on exactly what I wanted. I pictured something slightly modern, but that still felt really homey and played off the existing brick. Something that would make a big impact and serve as a focal point of the living room. And most of all – as renters – we knew we needed to keep it as non-invasive as possible. Can you believe that this entire design only required six screws into the brick? That’s the same amount that it would take to mount a TV onto the brick – which was pre-approved by the apartment owner (always be sure to clear projects with them first!). We settled on a design for a simple wood mantle and fireplace front with a raised, tiled hearth. 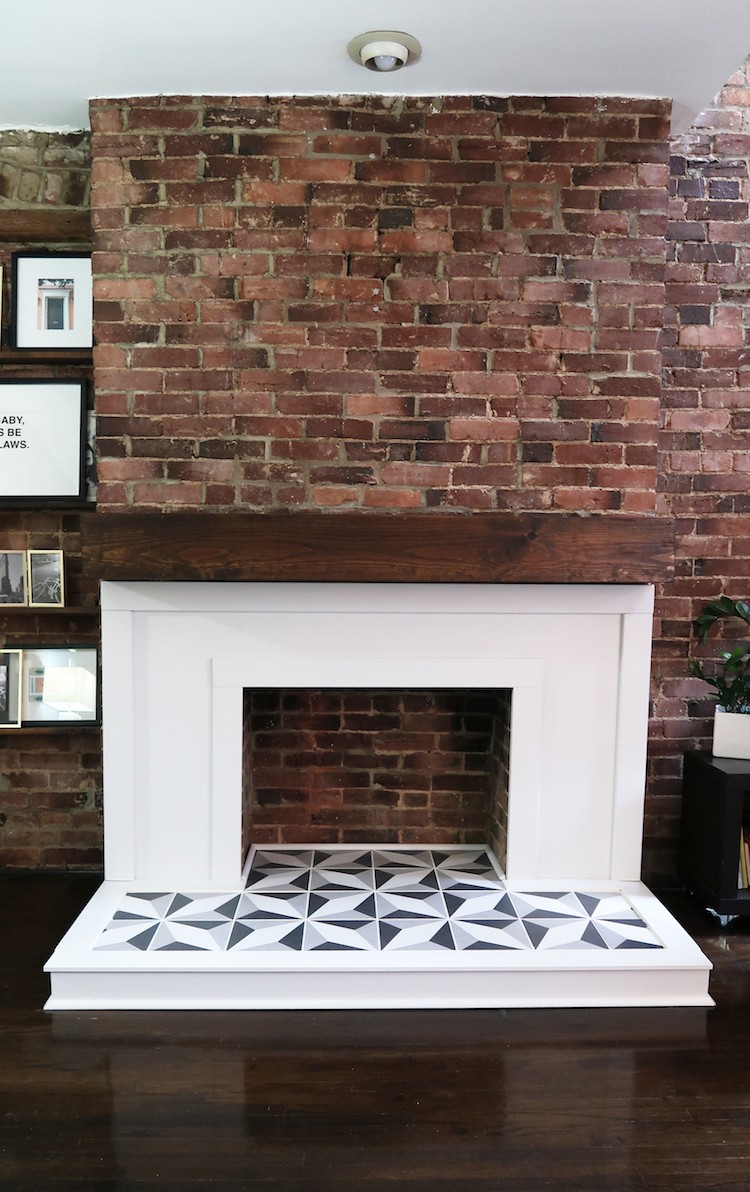 Now the fun part – we had to build it! The first task was replacing the “mantle” which was previously just a stained piece of wood. It didn’t feel substantial enough to me and I didn’t love the look of the bricks jutting out that it rested on. So we devised a plan to build a hollow floating shelf style mantle that simply slides onto the brick supports and rests there (so again – no mounting hardware to drill into the brick fireplace face!) – but that would have the look of a heavy piece of reclaimed timber. This was built using 1×8 boards, trimmed to length, and left hollow on the back side. On the ends we hid the seams using wood veneer. Then the entire mantle was sanded, stained (in color: ‘Early American’) and finished with a polyurethane sealant. 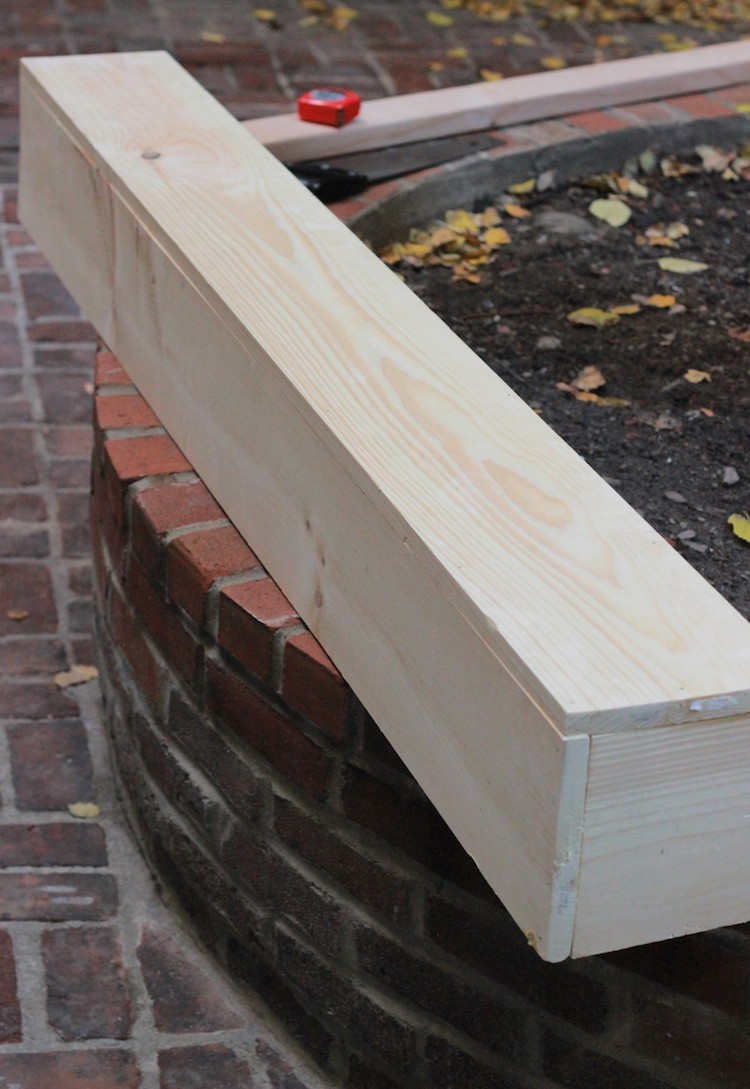 Next we built the fireplace front out of medium density fiberboard and 3 ½” width trim pieces. The fiberboard was mounted just below the mantle into the brick’s mortar while the trim was applied with wood glue and short finishing nails (that didn’t go through to the brick). Sanded, painted, finished! 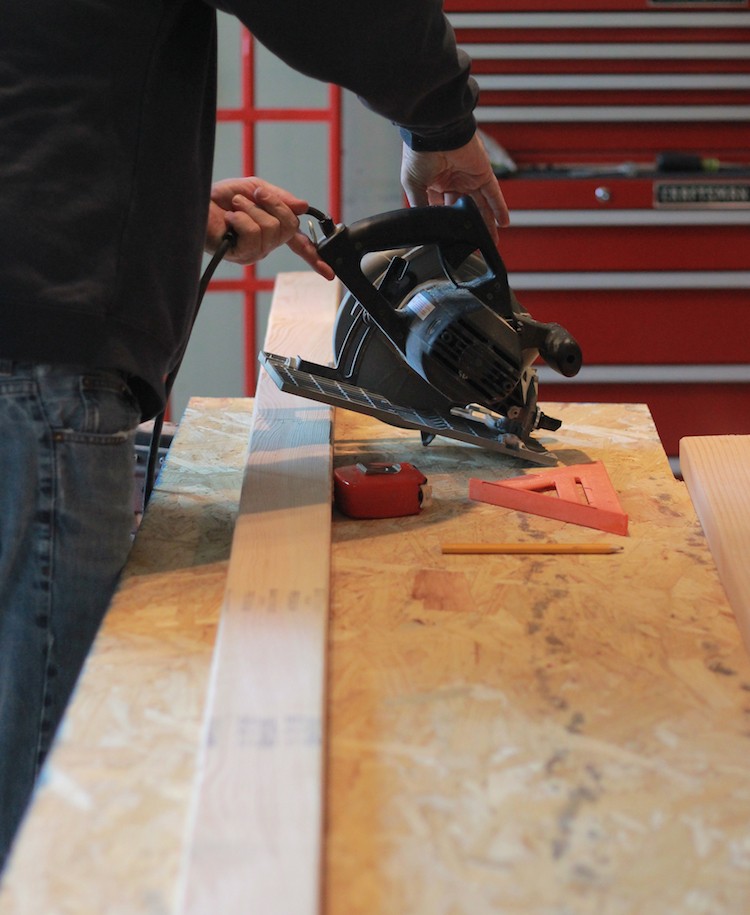 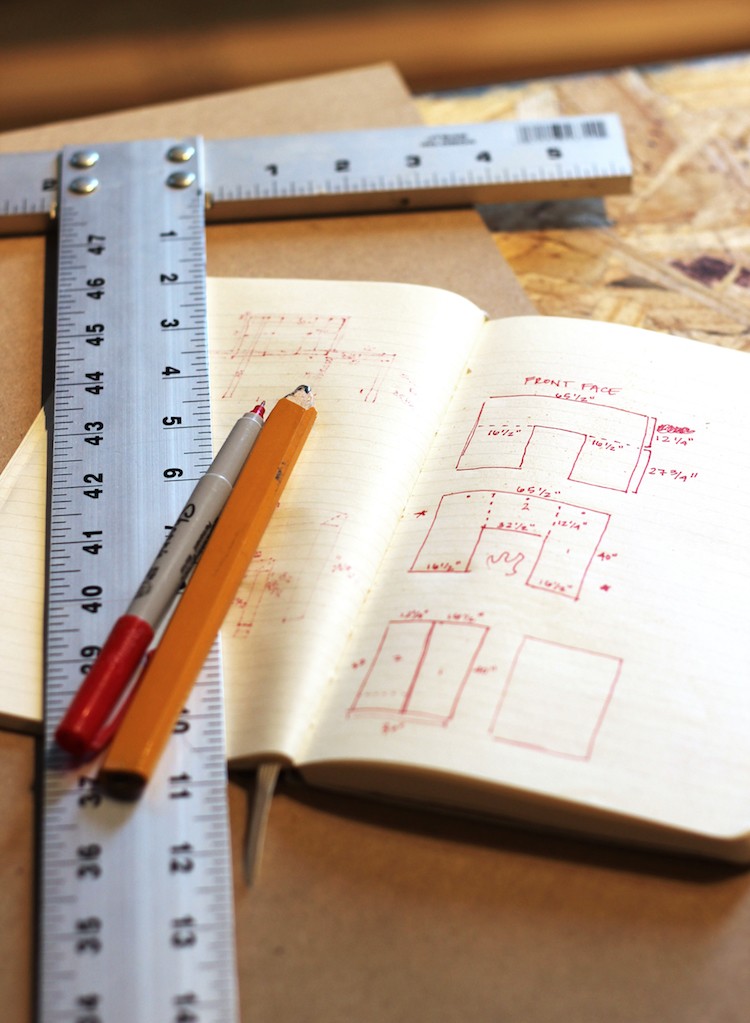 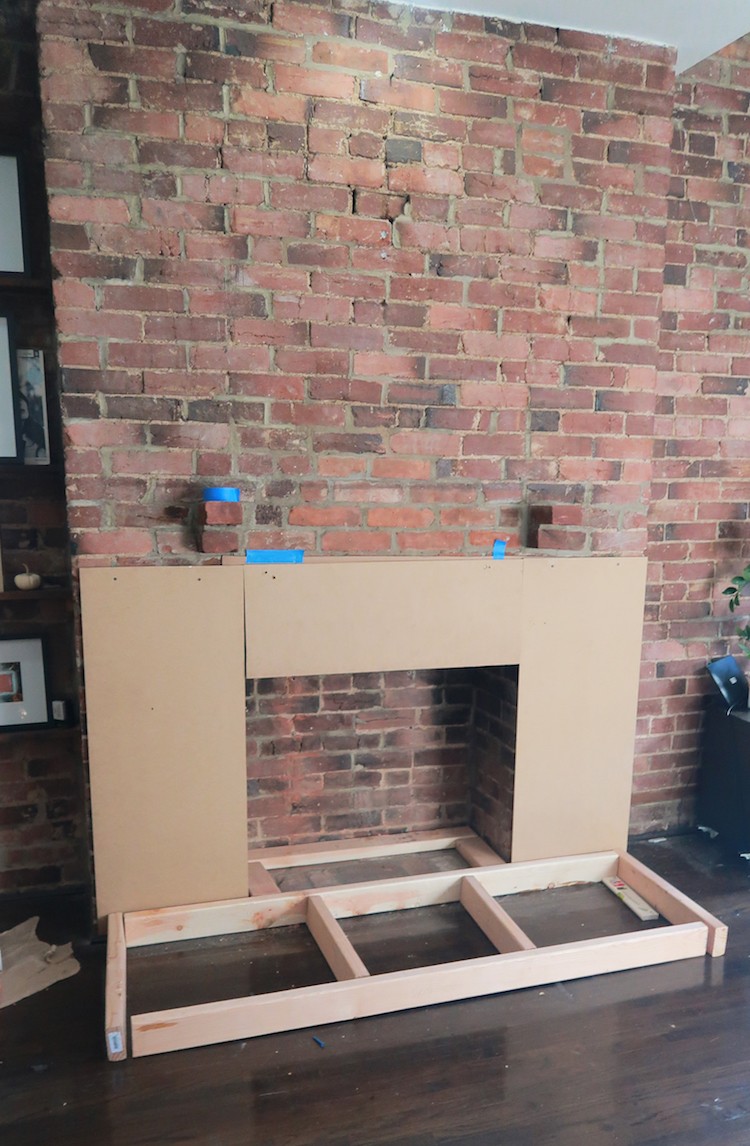 The most complicated part of the project was definitely the raised, tiled hearth. Built to simply rest on the floor and push into the fireplace itself (again, for the lowest impact on a rental), the foundation of the hearth was made using 2×4 boards with a plywood top. Then finished with trim pieces along the top, sides and floor. And of course, the centerpiece – this diamond design ceramic tile. Which (surprisingly!) came together easily thanks to ⅛” tile spacers and pre-mixed adhesive and grout. 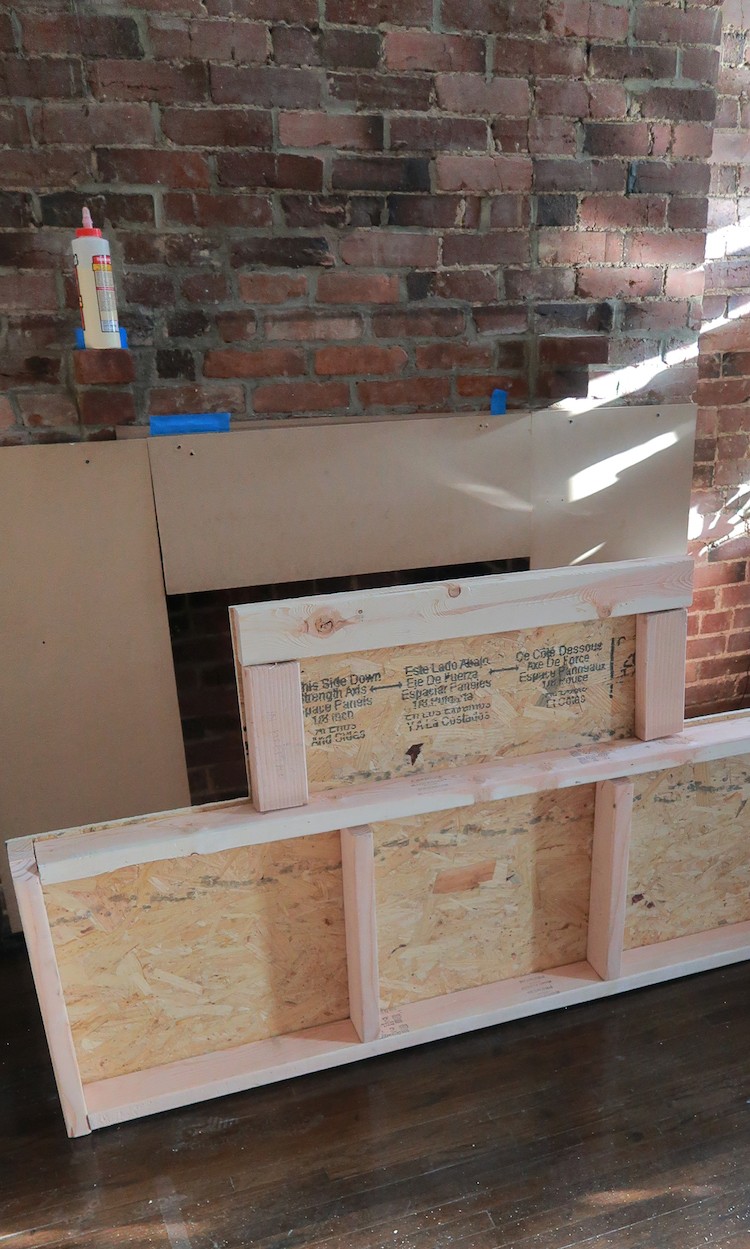 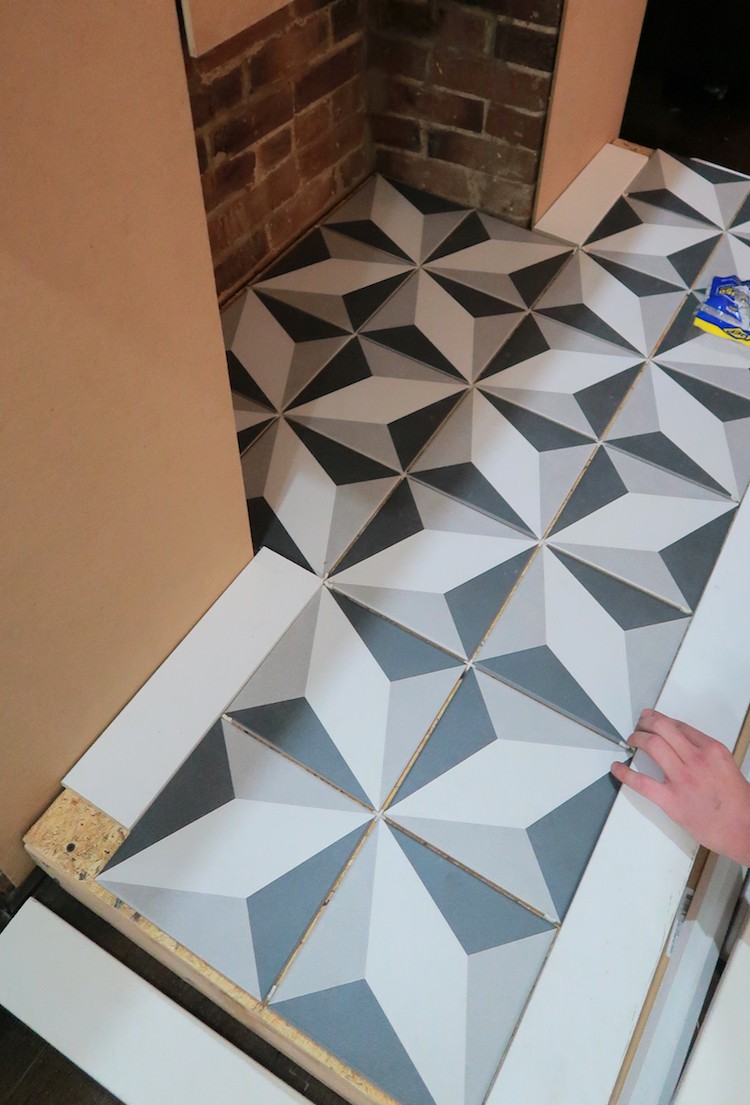 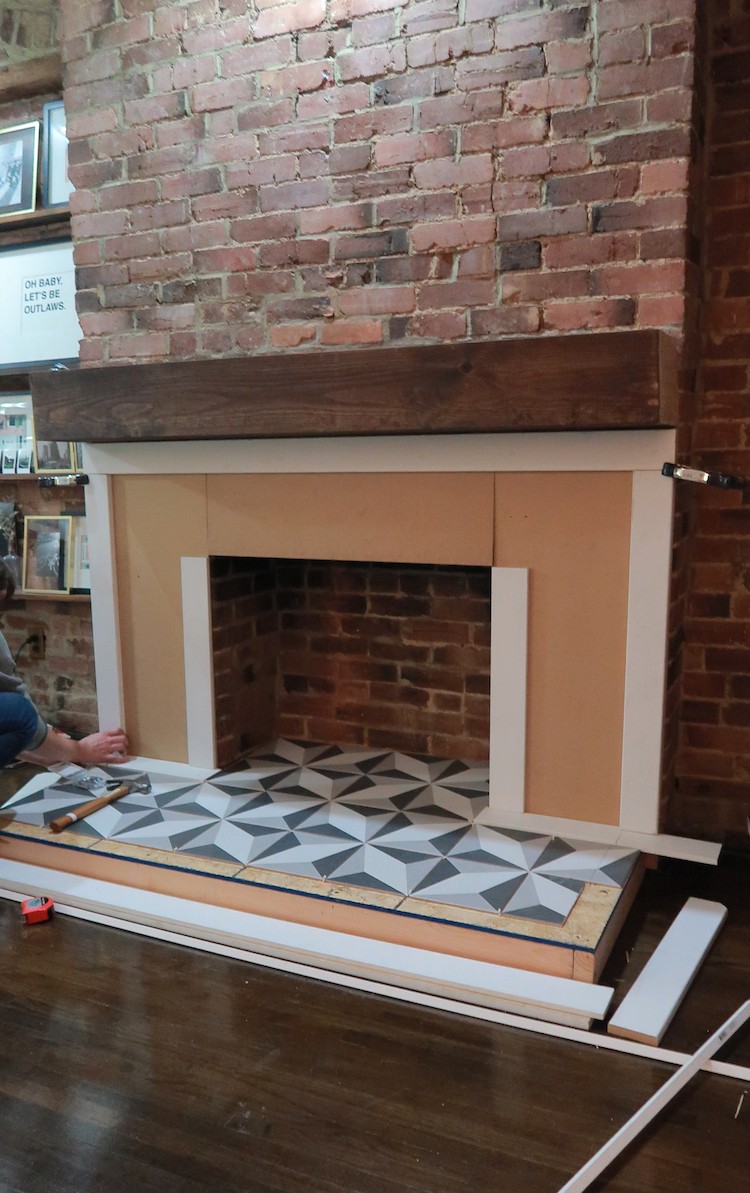 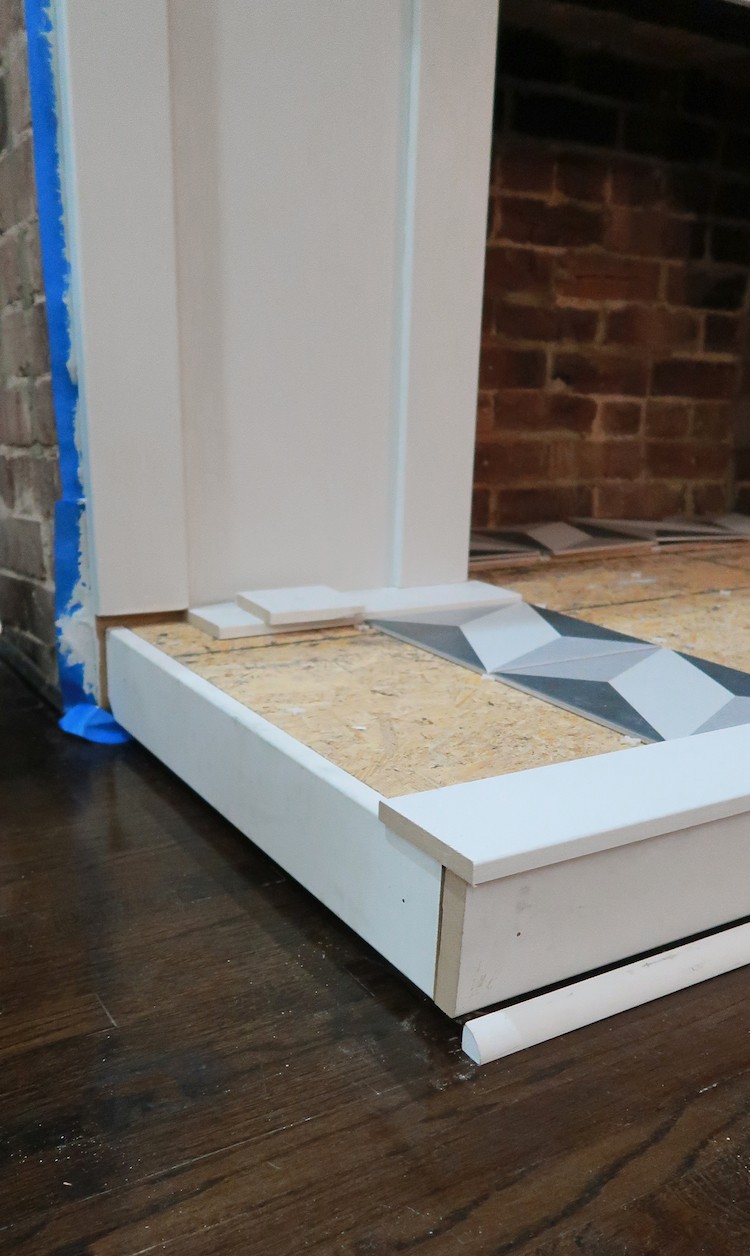 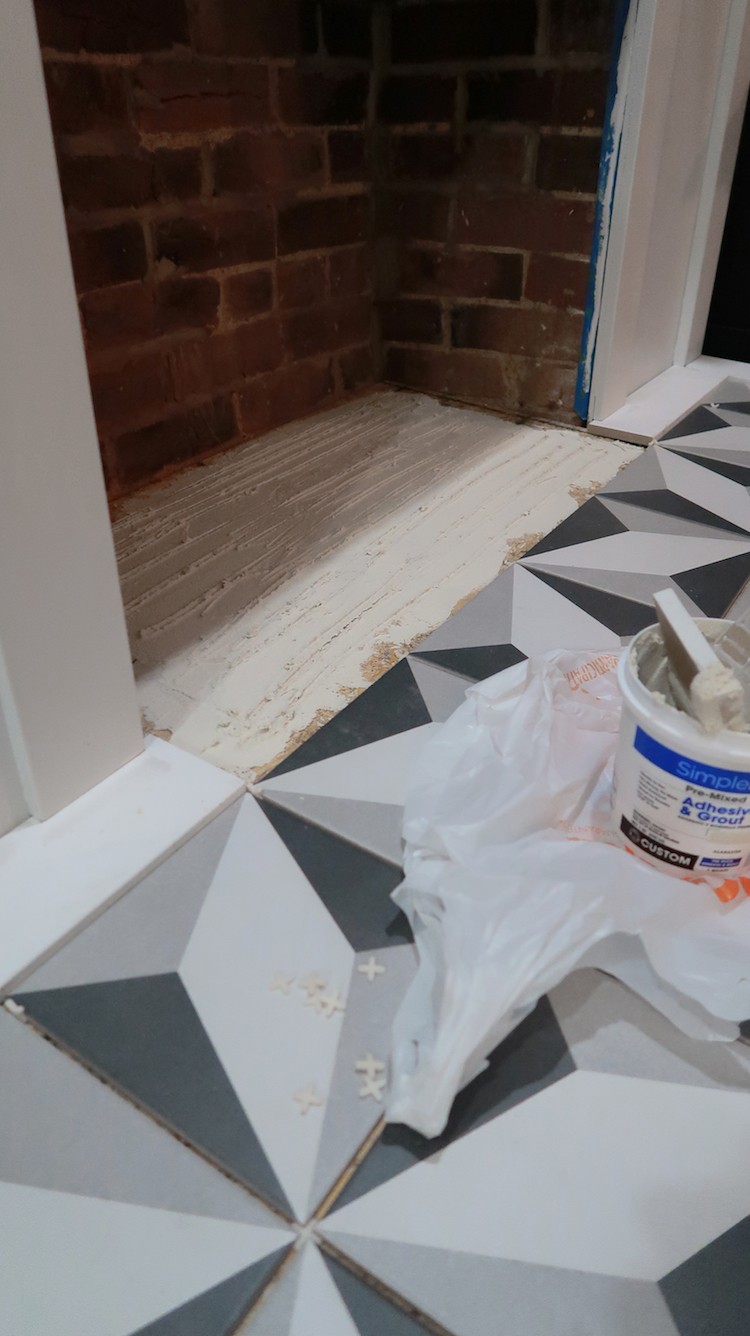 All in all, this DIY fireplace makeover has high impact with minimal disruption and we couldn’t be more thrilled with the final results. While we may be in a rental, that doesn’t mean we have to sacrifice on style. 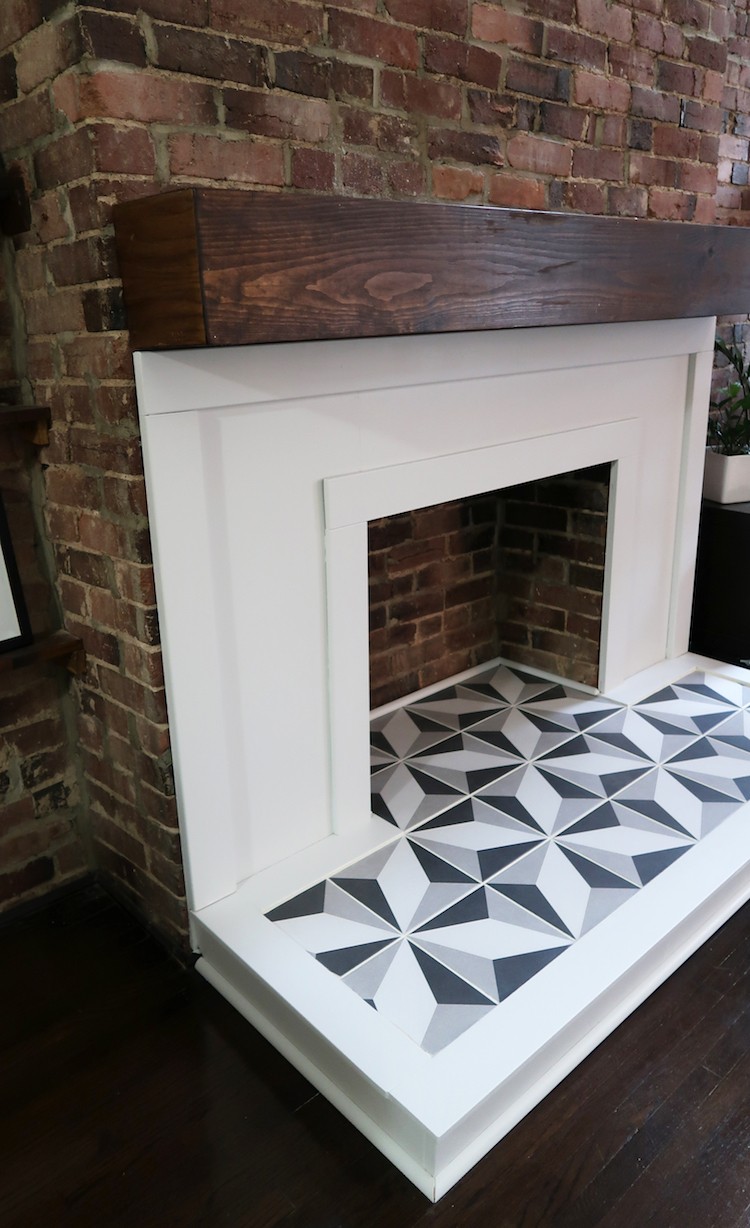 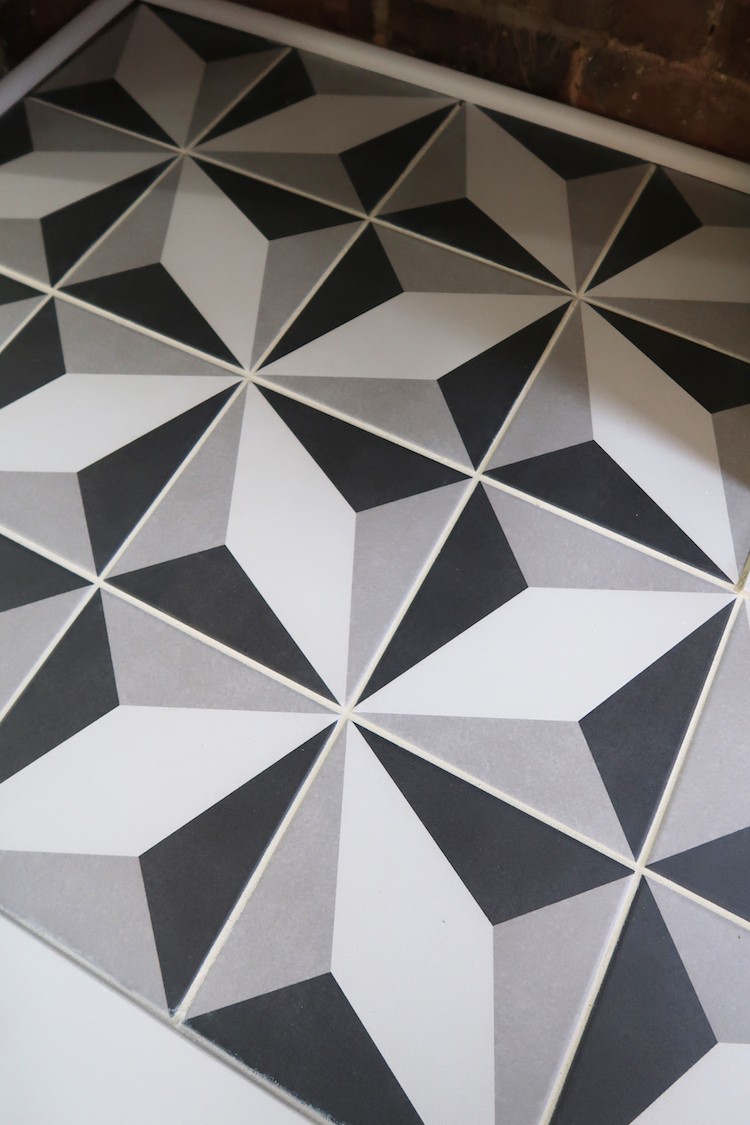 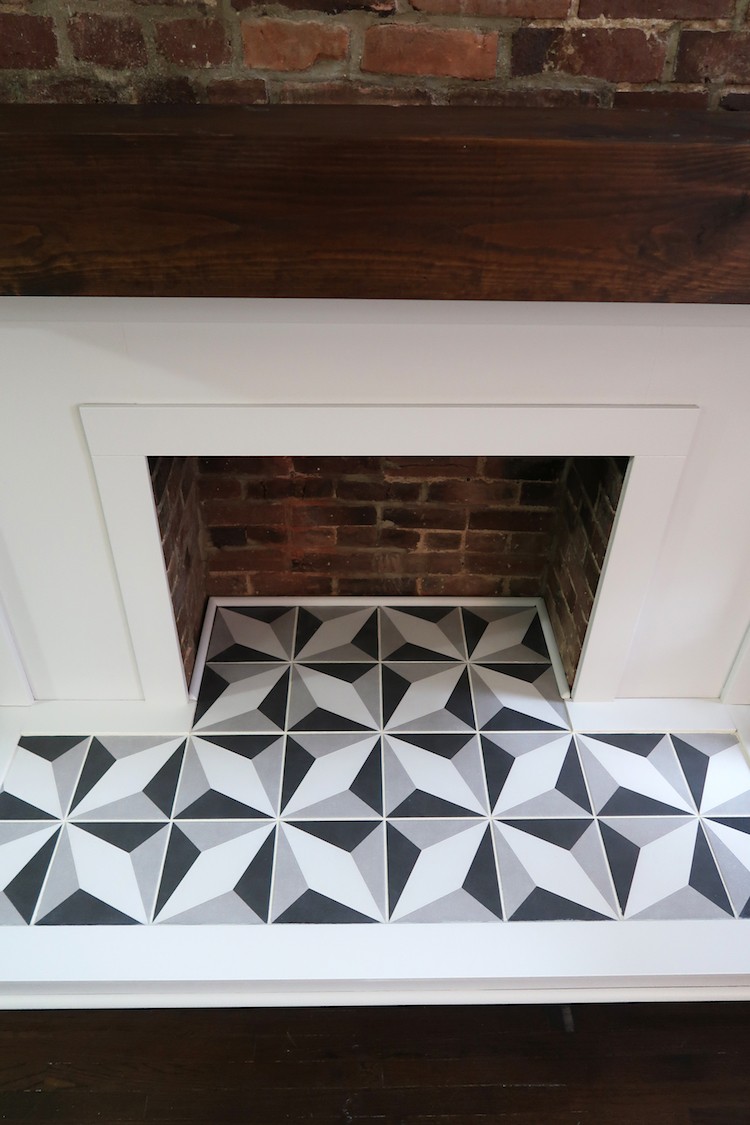 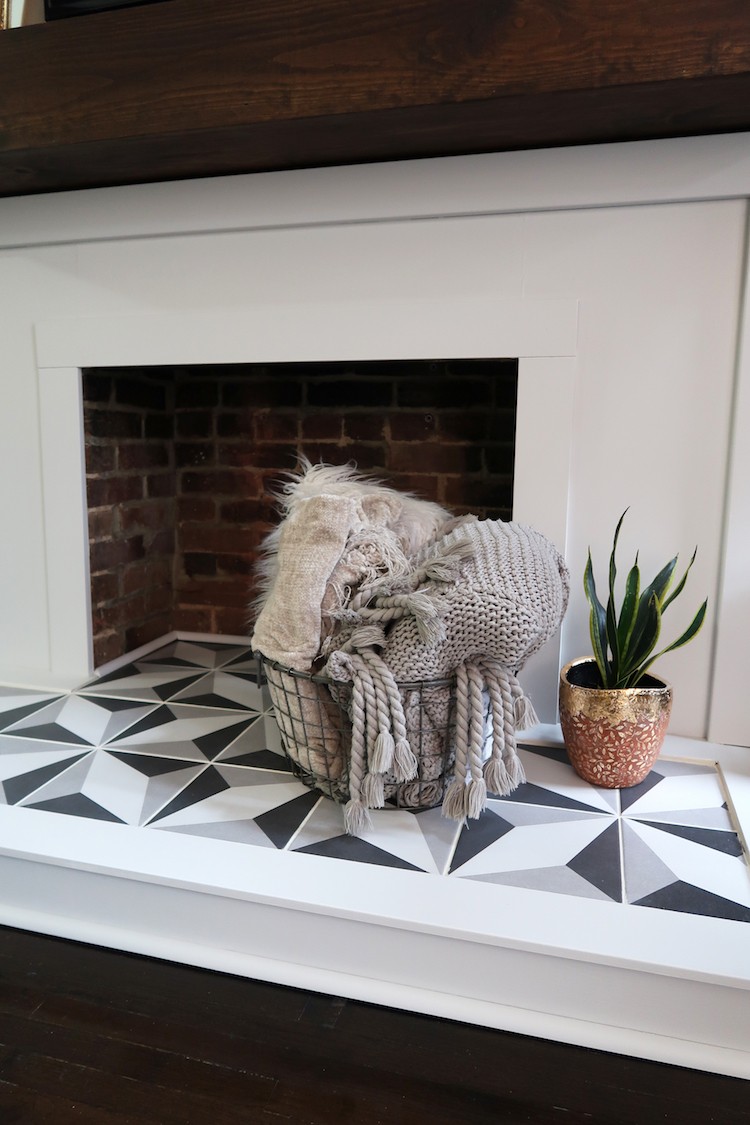