(BPT) – Millions of dogs enter shelters each year. And while rescue organizations work tirelessly, the sad truth is that fewer than half of these dogs are getting the grooming they need due to a lack of resources. The effects of neglect, or a life on the street, can often overshadow the beauty that lives inside these dogs, and too often they are overlooked by adoptive families. That’s why pet industry leaders Wahl and Greater Good Charities have partnered once again for their 10th annual Dirty Dogs Contest (dirtydogscontest.com). They donated grooming supplies, and in turn, rescues and shelters shared remarkable Before & After makeover photos – including the Top 10 Shelter Dog Makeovers of 2021. Vote for your favorite pup and help the organization affiliated with the dog win $10,000.

Elmer and two of his pals were brought to a shelter by a landlord whose tenants moved out and left the three senior dogs alone in their crates. These three musketeers were in terrible shape; and the vet helping Elmer stated she had never seen matting as severe as his. Fortunately, with a lot of TLC, Elmer transformed into a handsome gentleman and now lives in the home of his dreams. 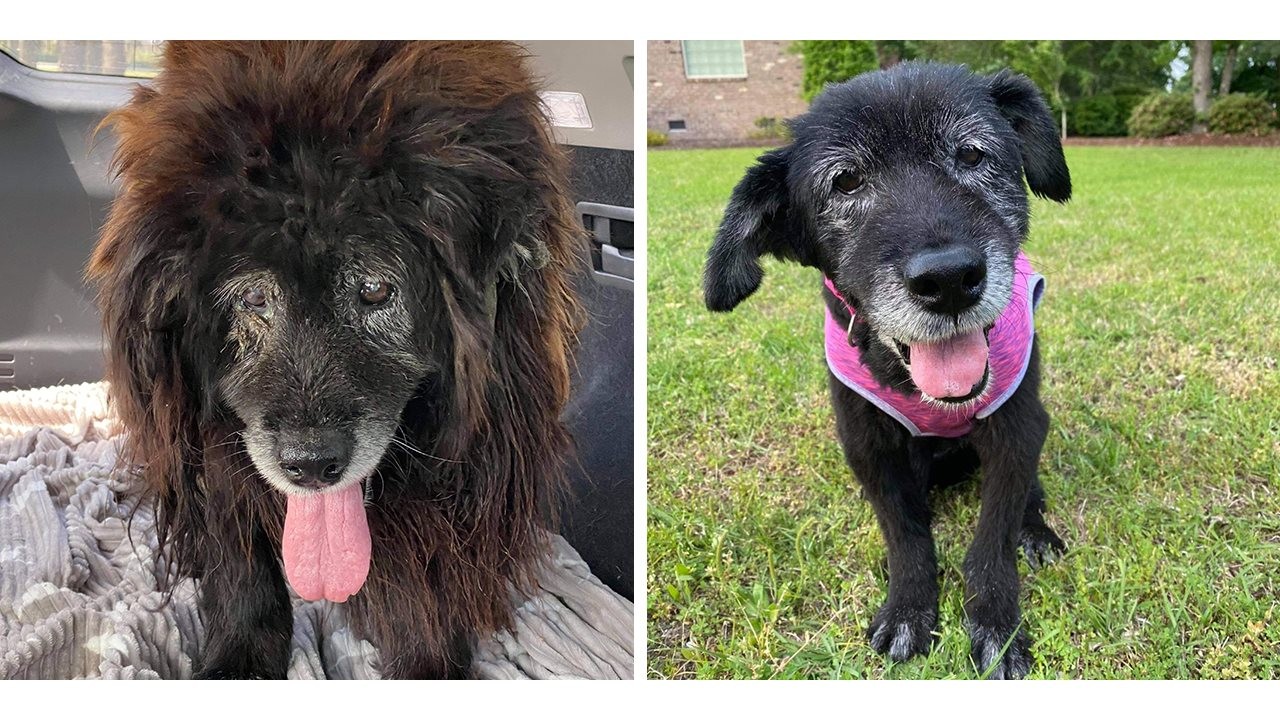 Easton must have seen a lot of hardship in his 12 long years. He was rescued from a high kill shelter that was going to euthanize him because he was unable to walk due to neglected matting. From there, his story took a dramatic turn when a good grooming revealed that ‘he’ was actually a ‘she’. Now with a new haircut, and a new identity, Easton is living her best life. 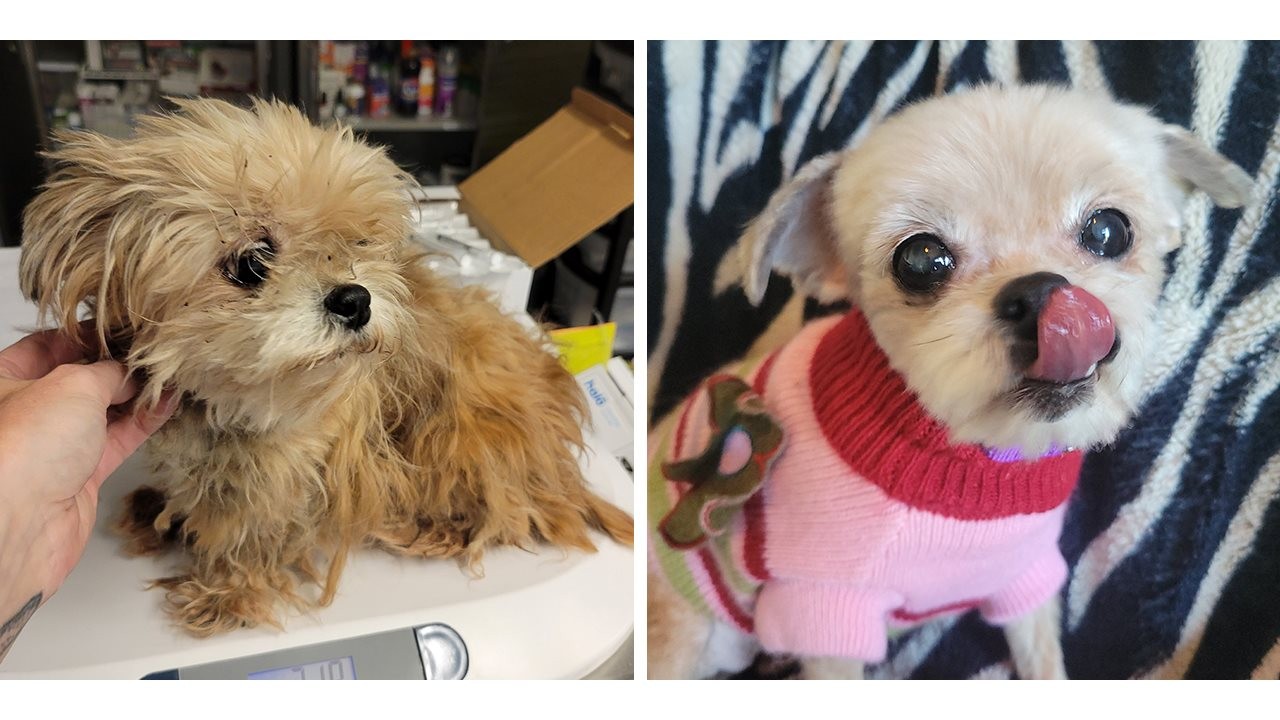 Elise (aka the Muppet) was one of three dogs rescued from a woman who had dementia and could no longer properly care for them. Elise had severe matting which made her four paws look like eight. Her nails were over an inch long with additional nails undergrown back into her pads. Elise, now lovingly referred to as the Muppet, received a manicure and some proper pampering to become the pretty girl she is today. 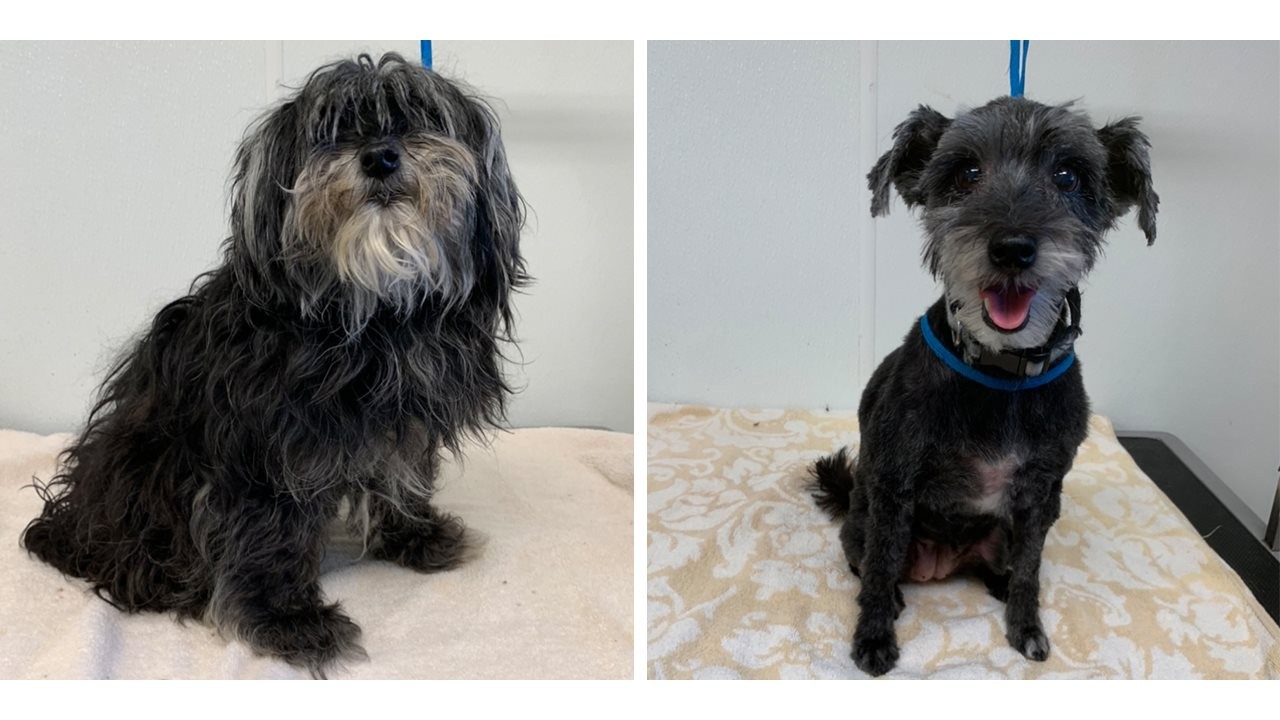 Cheyenne was brought to the shelter as a scared and clearly neglected stray. Her coat was so matted she had difficulty going to the bathroom, which caused her extreme discomfort. After a two-hour grooming session, however, a sweet and happy Mini Schnauzer was revealed. Cheyenne will soon be available for adoption and is thrilled to finally find a forever home. 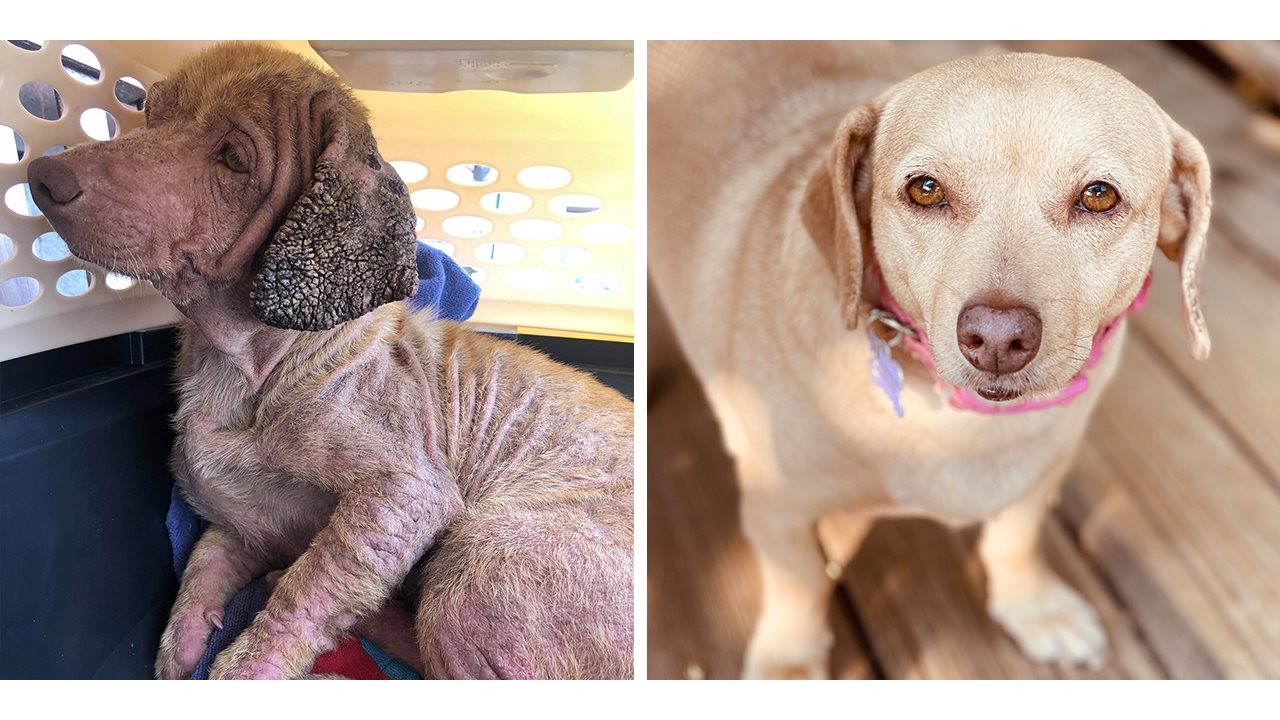 Olivia’s journey to recovery began on Father’s Day when she was found drinking from a gutter in a very busy neighborhood. A good Samaritan alerted a shelter to her whereabouts and she was brought in immediately. There it was discovered that Olivia suffered from severe mange. After months of care and healing, she transformed into a gorgeous girl. 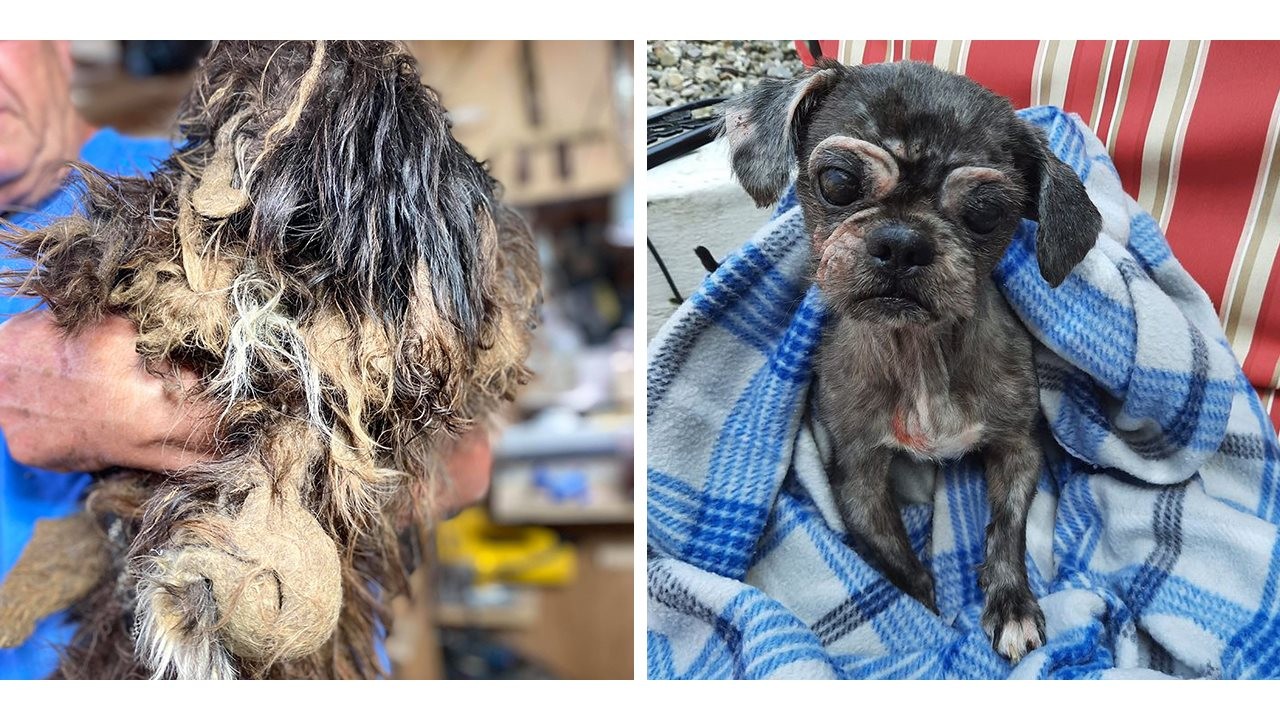 Oliver was rescued after suffering from severe neglect. He was in such bad shape his poor little eyes were matted open. After a proper grooming, things started looking up for Oliver, and he was placed with a loving family who proclaims him “the sweetest dog alive!” Oliver is finally living his best life. 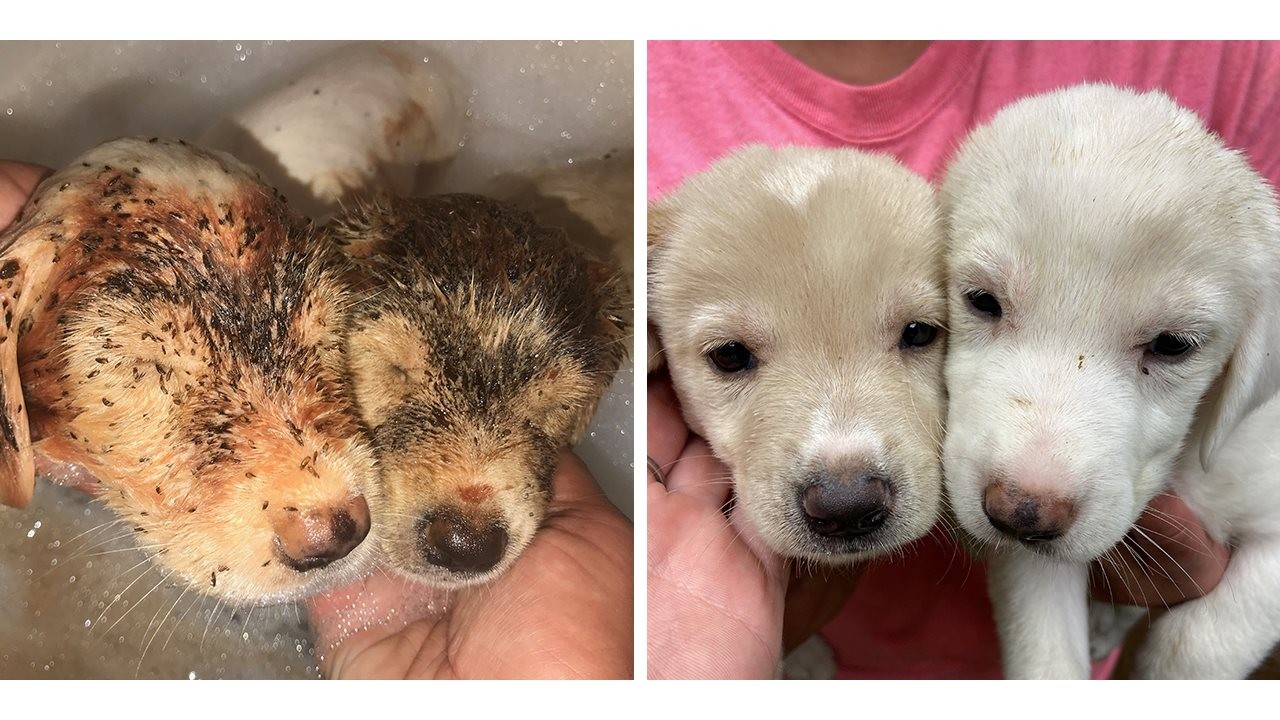 Sharon and Debbie were found as strays huddled in a culvert. Their rescuers were shocked by what they discovered on the sweet puppies. What appeared to be dirt was actually thousands of tiny fleas, leaving them uncomfortable and at-risk. After three long baths, the sisters were finally clean and ready to cuddle. 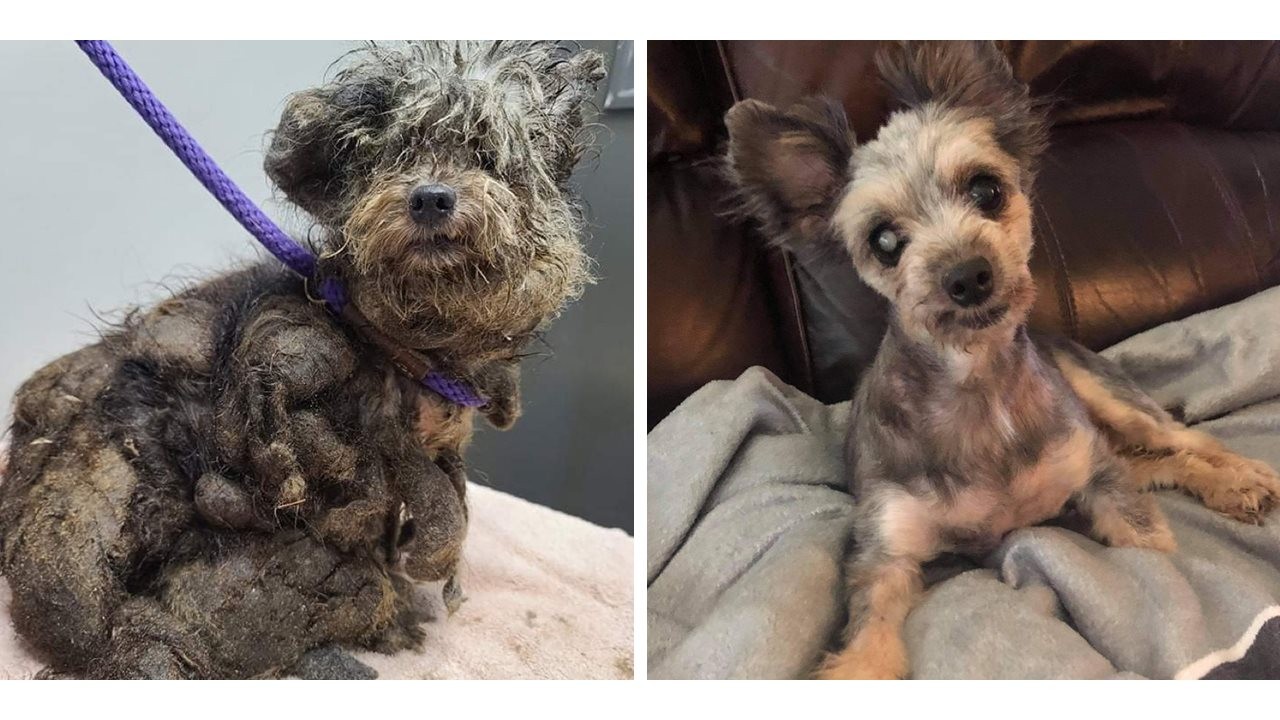 Godiva was found in deplorable condition. Her mats were so severe, her rescuers worried about injuries under all that fur. Groomers began the slow, tedious process of cutting out the mats. After hours of grooming, and two pounds of extra fur, a little girl emerged that’s as sweet as her name. 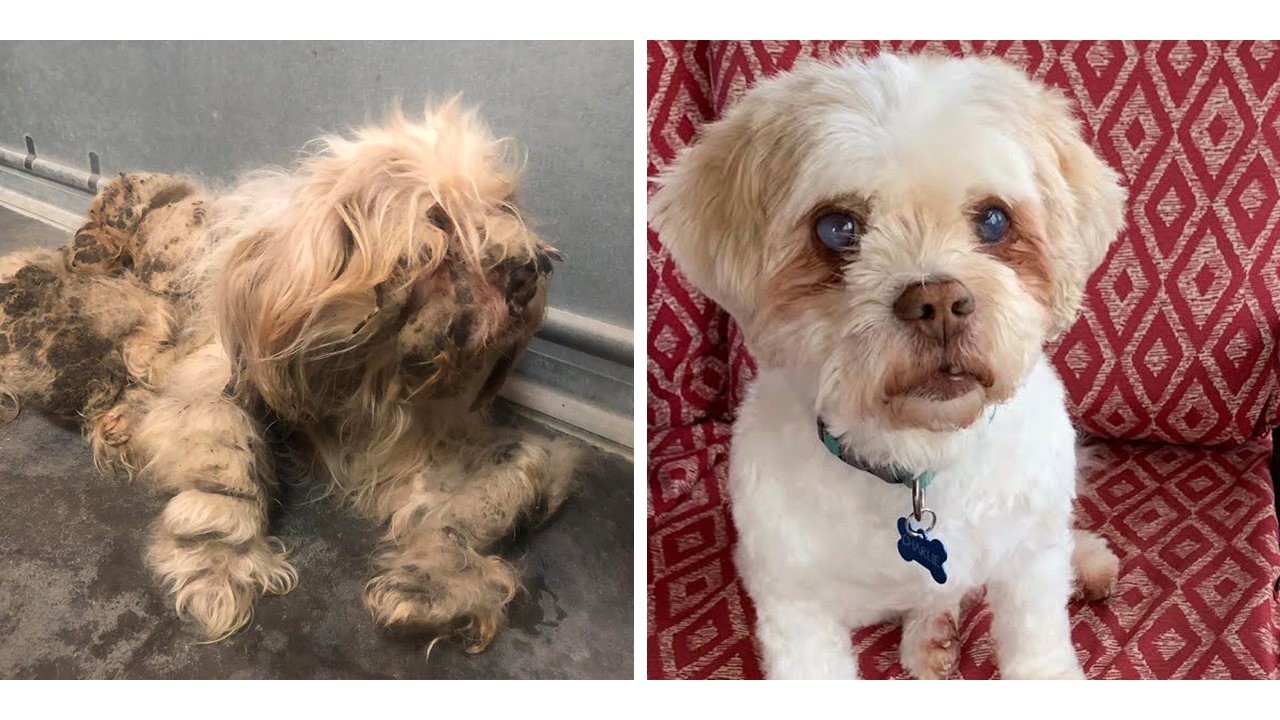 Woodrow was brought into the shelter as a stray. Living in the harsh outside conditions took an extreme toll on Woodrow. The matting in his fur was so severe he could barely move, his long nails curled around his paws twice, and he was left blind from neglect. After an extensive and tedious grooming, using every tool in the chest, a cute little man slowly emerged. Woodrow soon found a new family and is now weathering kisses rather than storms. 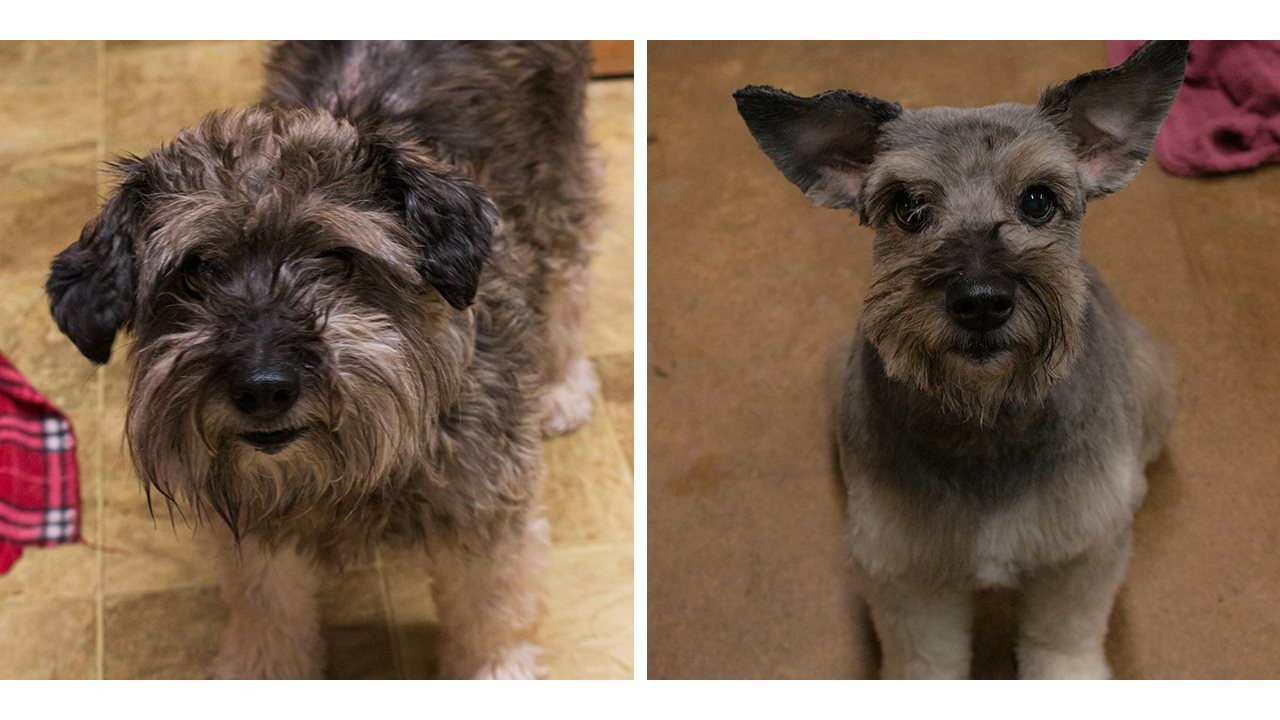 Mallory arrived at the shelter looking very scruffy and unwell. Her back was completely raw from scratching, she limped from an unknown injury and matted fur completely covered her eyes. After treating her injuries, Mallory was treated to a nice bath and haircut, transforming her into a real catch. Mallory is now happily adopted and loving her new home.