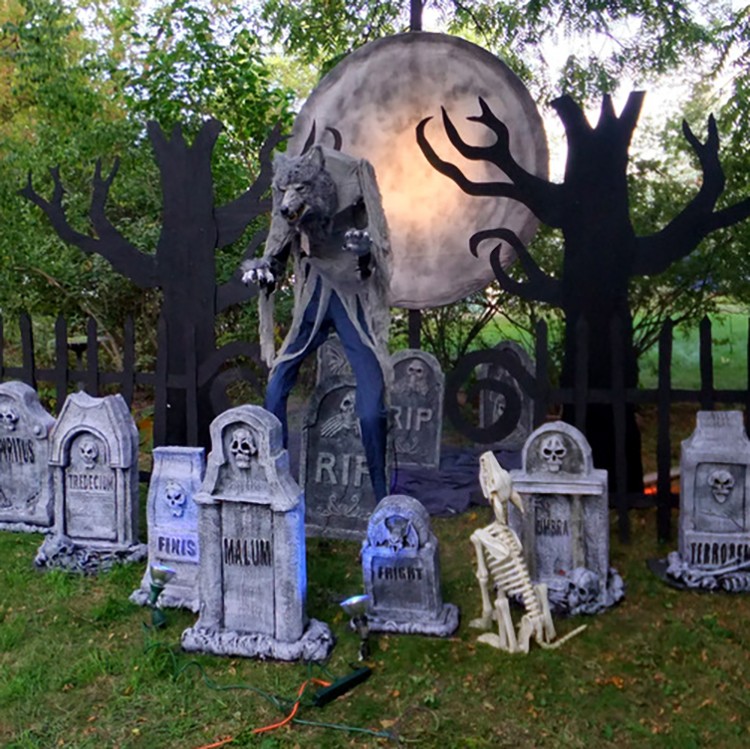 Scott Stoll of Stolloween created yet another amazing outdoor space for The Home Depot’s Halloween Style Challenge. We challenged Scott to create a spooky scene with a few materials and he constructed a chilling Halloween werewolf scene.

Take a look at how Scott made this amazingly spooky Halloween werewolf scene come to life in his own backyard. 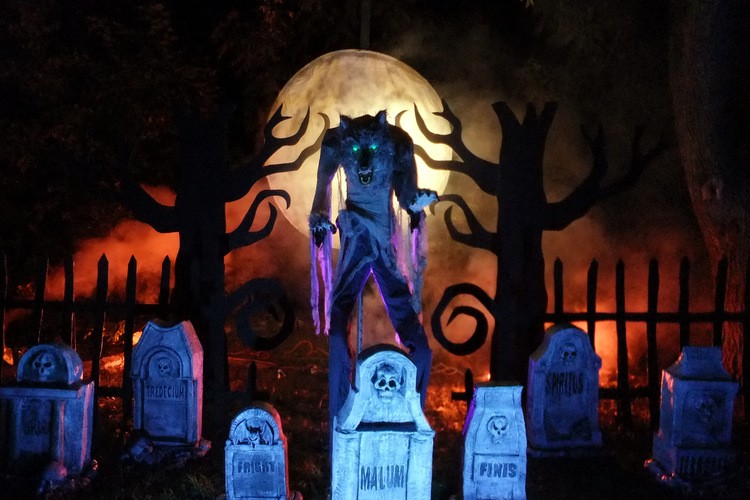 Whenever I look back, I think of 1981 as being one of the greatest years ever. First, it was the year I graduated from high school and started college. It was also the year that two of my favorite horror films were released: The Howling and An American Werewolf in London.

Both films featured remarkable werewolf transformation sequences and a dark sense of humor, which made them even more enjoyable. This year when The Home Depot contacted me regarding participating in the 2017 Halloween Style Challenge, they allowed me to choose from various Halloween themes. One of the themes was werewolves. I knew right then and there that it was go time for a spooky Halloween werewolf scene. The challenge for this year was to design a space around The Home Depot’s 7-ft. Towering Werewolf animated prop. 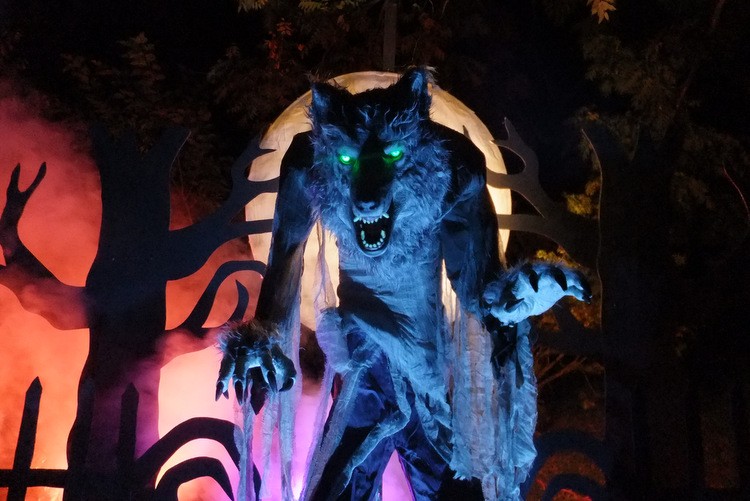 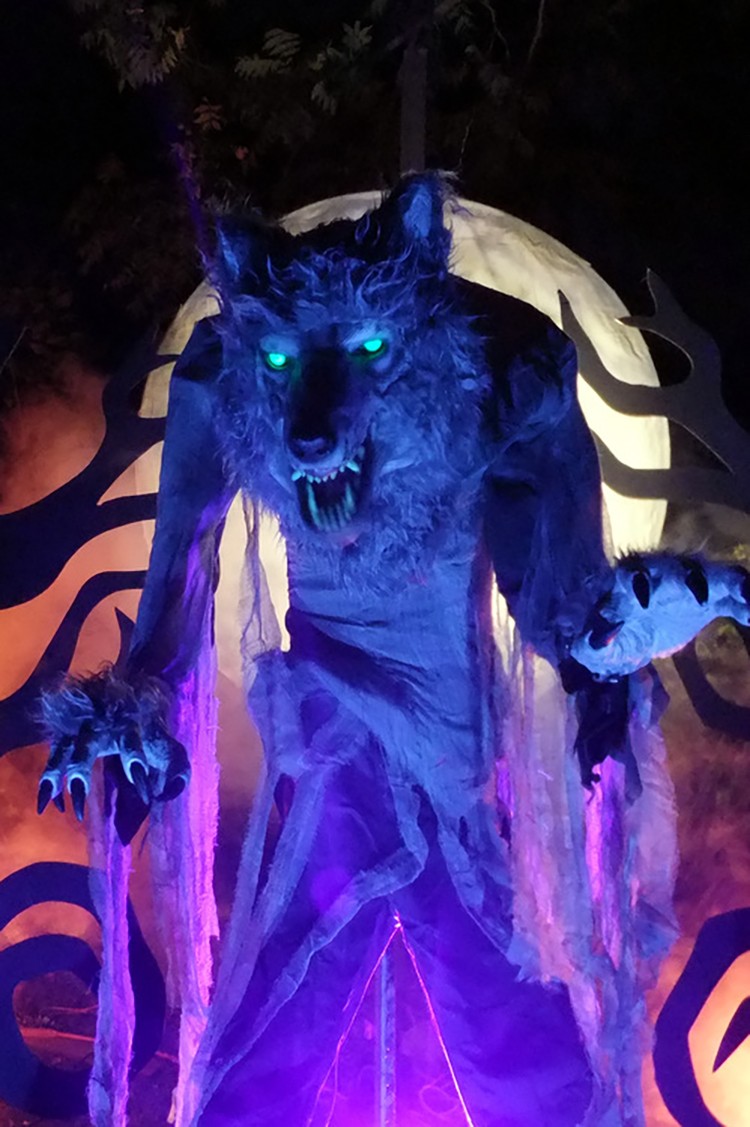 The Halloween werewolf prop was very simple to assemble. Everything snapped together without the need for tools. As the name suggests, the werewolf stands 7-ft. tall. When turned on, it features some very scary movement and sound.

One of the things I usually do when designing a set is to make a list of things associated with the theme. In this case, the top three things that came to mind were a full moon, trees and fog. The second thing I do when designing anything is to do some quick concept sketches. 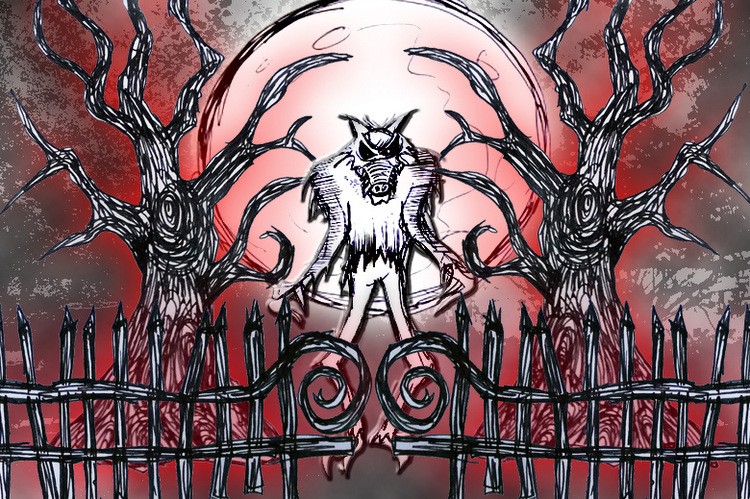 My plan was to build five different elements that would showcase the werewolf. Those elements included a large full moon, two creepy tree silhouettes and two sections of fencing. 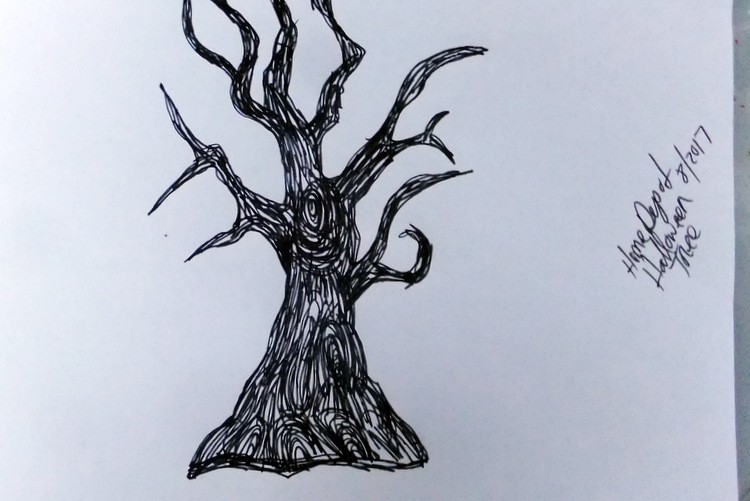 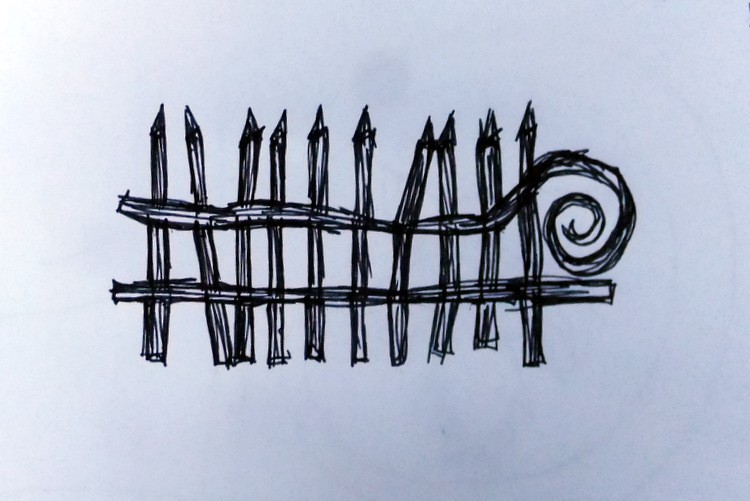 The werewolf prop is pretty realistic and frightening so I opted to design the trees and fencing in more of a whimsical or fairy tale style. This would balance everything and hopefully create a fun and unique visual experience. The first task was to create a large full moon set piece that would act as the focal point of the display. 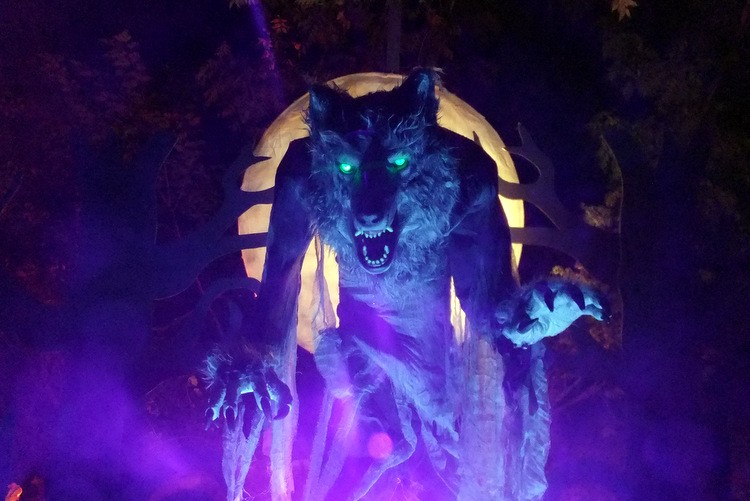 Honestly, I had no clue as to how I was going to create a full moon prop. The only thing I knew is that it had to be lightweight and portable as I would build everything at my studio and transport it back to our house for the setup and photo shoot. 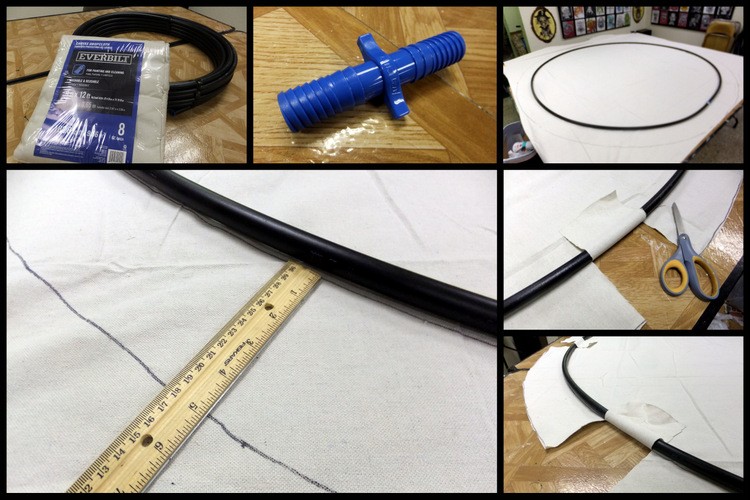 One of my joys is figuring out how to make something, so the moon began with a trip to our local Home Depot. I just wandered the aisles looking for inspiration and the right materials. Luckily the solution presented itself quite quickly once I found some ½ in. Poly Flex tubing, couplers, a 12 x 9 ft. canvas drop cloth and can of gray spray paint.

The moon was built by cutting a length of plastic tubing large enough to make a 6½-ft. diameter circle with the two ends secured with a ½-in. coupler.

I placed the large hoop on top of the canvas drop cloth and traced the placement with a black marker. The circle was extended another 5 in. and cut from the drop cloth. Cuts were made at 5-in. intervals along the entire circumference. I wrapped the fabric around the plastic tube then hot glued into place. Once I secured all sections, the canvas held the plastic tubing in a perfect round shape and gray spray paint was used to give the front a moon-like appearance. 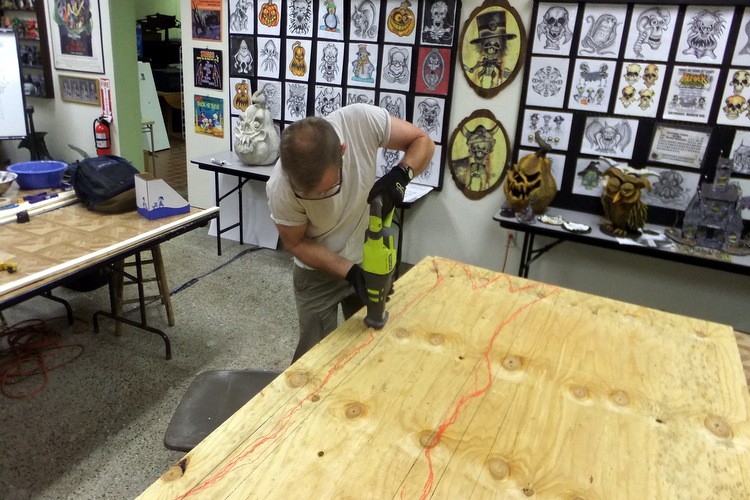 Next on the list were two creepy yet whimsical tree silhouettes. The trees were made with ⅜-in. plywood. The designs were created free hand. First, I cut the trunks of the trees then the branches. 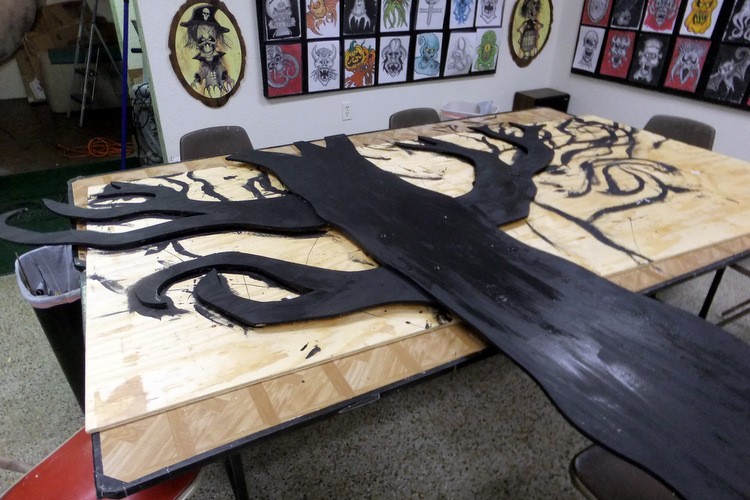 The first tree was designed and cut. Then the pieces were used to make a mirror image of the second tree. The branches were attached with carriage bolts making it easy to transport and store. Once the tree was assembled, it was painted with flat black exterior latex paint. 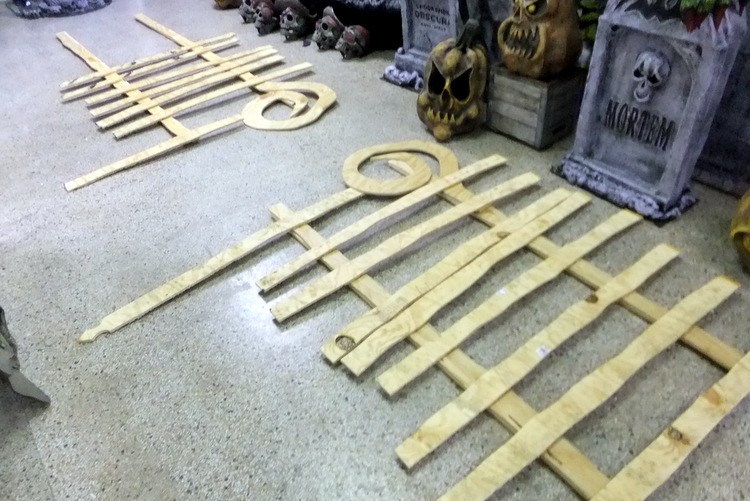 The whimsical curvy fence was made in a similar fashion using ⅜-in. plywood.

Once again, everything was designed freehand with a concerted effort to not produce any straight lines. The pieces were individually cut with a reciprocating saw, assembled with screws and painted flat black. 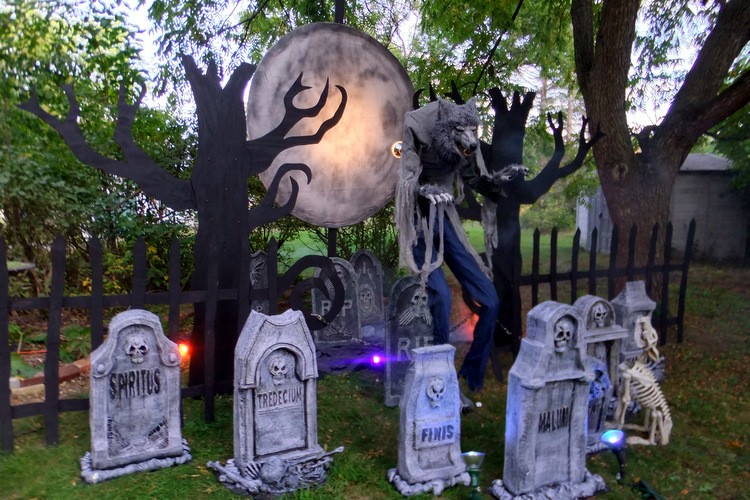 Now that the five elements were completed they were transported back to our house and set up in our backyard. 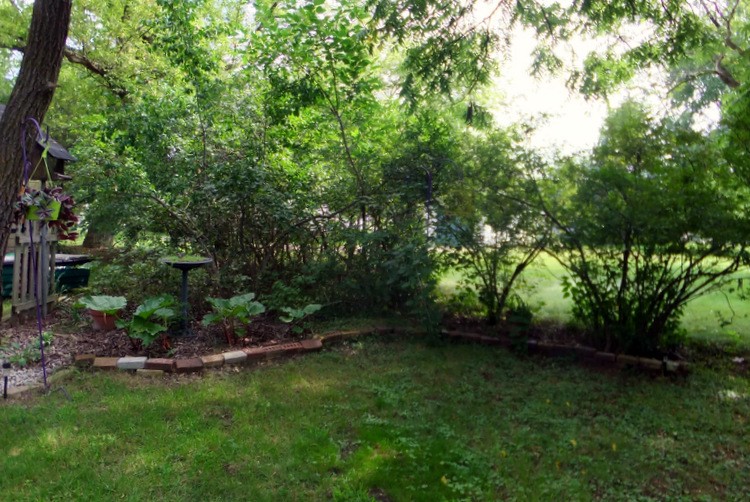 The chosen location featured a large backdrop of older lilac bushes, the bushes had a very woodsy feel which would help tie the whole scene together. 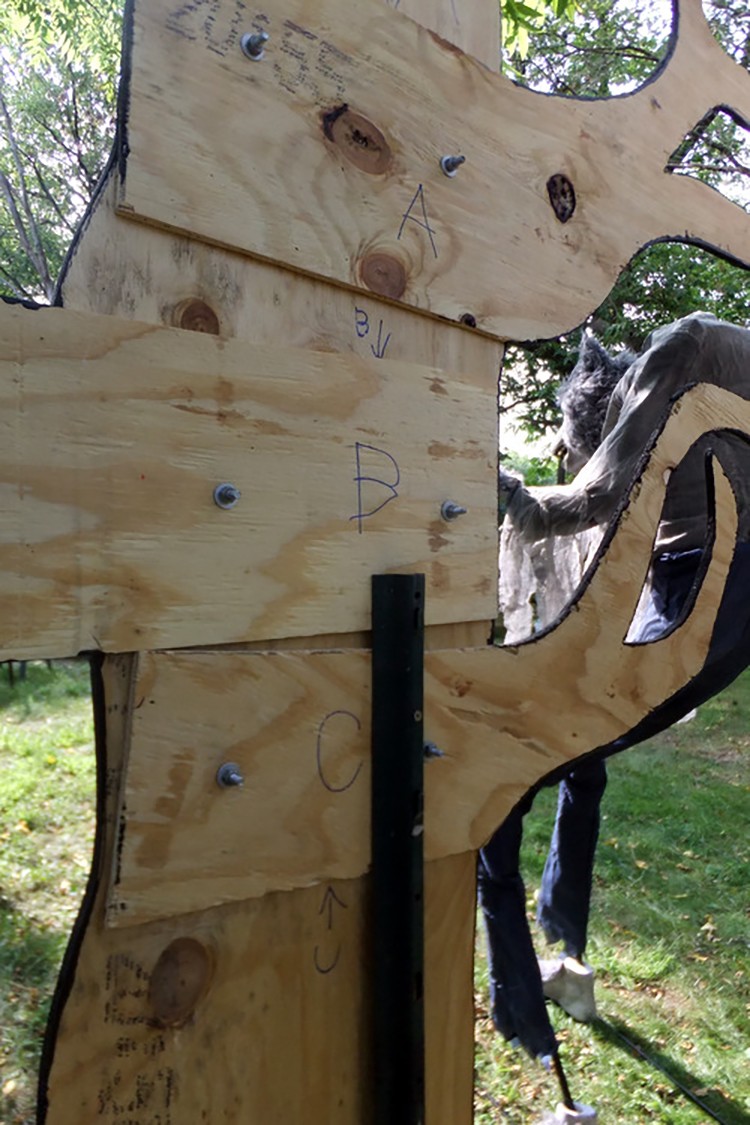 All the set pieces were supported using metal fence posts securely sunk into the ground. 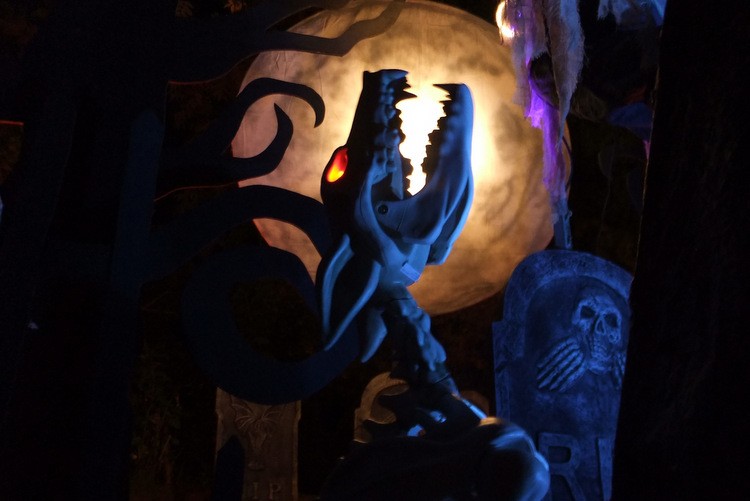 The moon was hung on a 12-ft. x 2 x 4 in., which was held upright by attaching it to a metal fence post. The trees and fence were also supported in this manner. The werewolf took center stage and the scene was dressed with some papier-mâché tombstones I created in 2013. Just for smiles, I included the 28-in. Animated Howling Skeleton Wolf with LED Illuminated Eyes I received for last year’s Halloween Style Challenge, too. 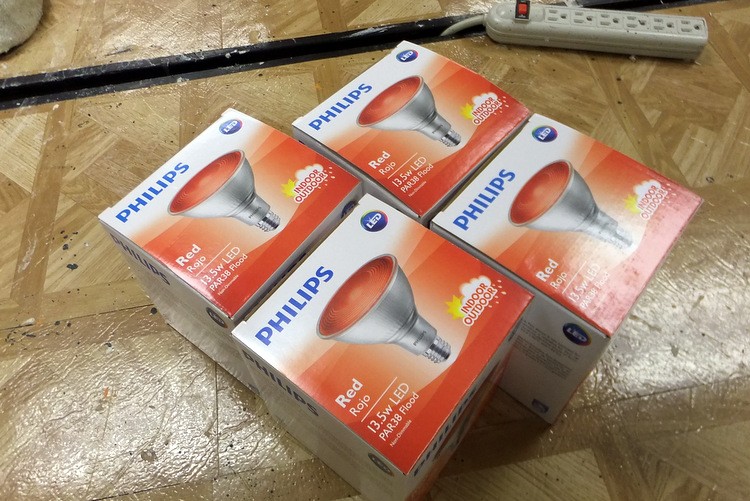 Once the pieces were in place, the entire scene was lit with LED floodlights. Four red floods were used to backlight the trees and fence, two blues were used to illuminate the Halloween werewolf and a single clear flood light was used on the moon. 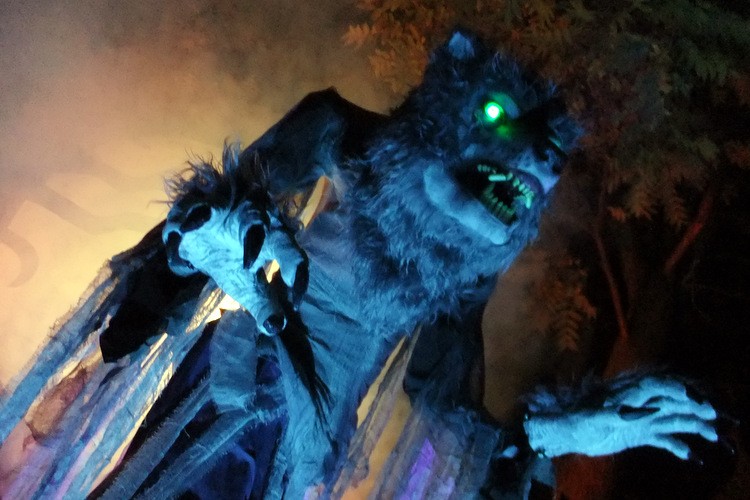 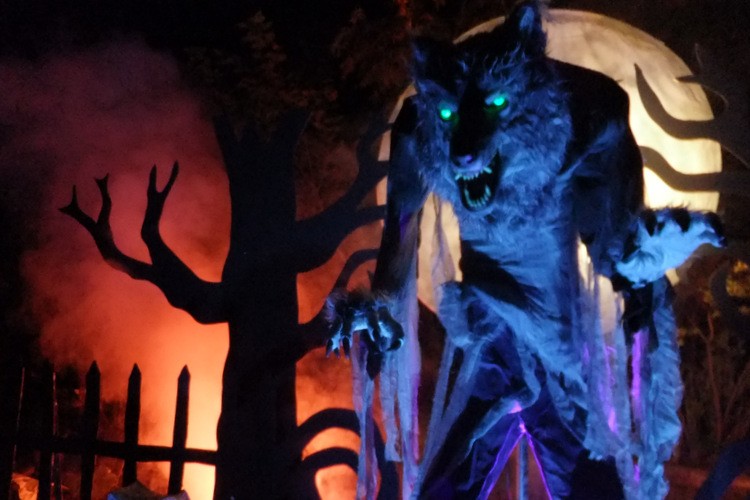 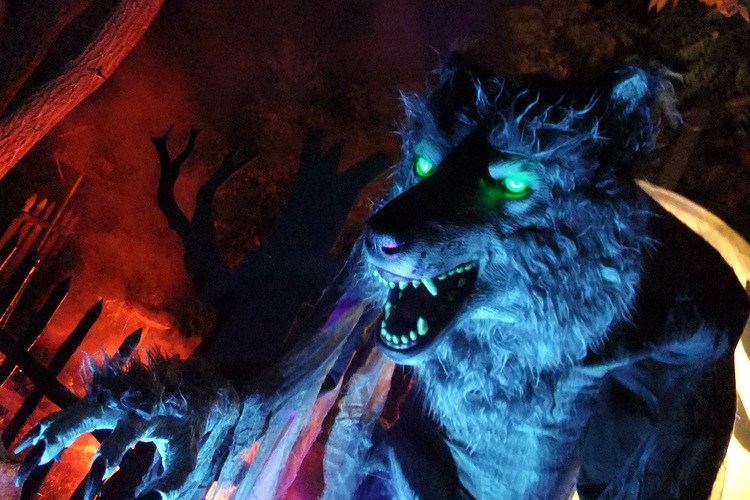 To make the scene come to life, it was important to have the background filled with fog so that the red floodlights would make the tree and fence silhouettes visible.

For the photo shoot, I disabled the body movements of the werewolf to prevent blurring due to the long exposure times for night time photography. 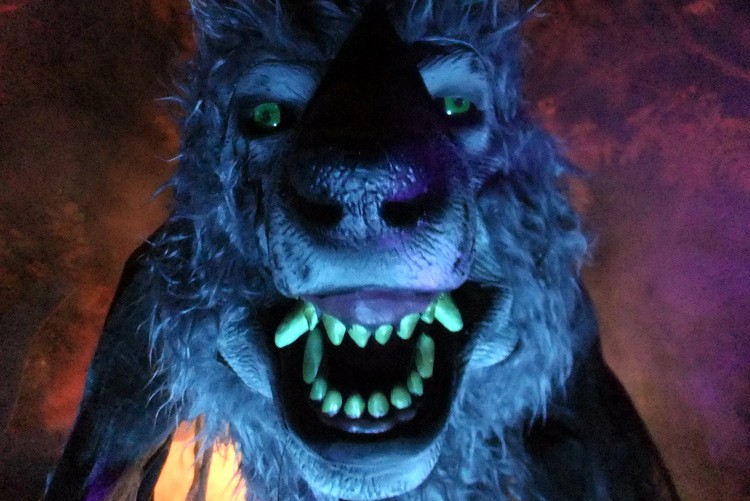 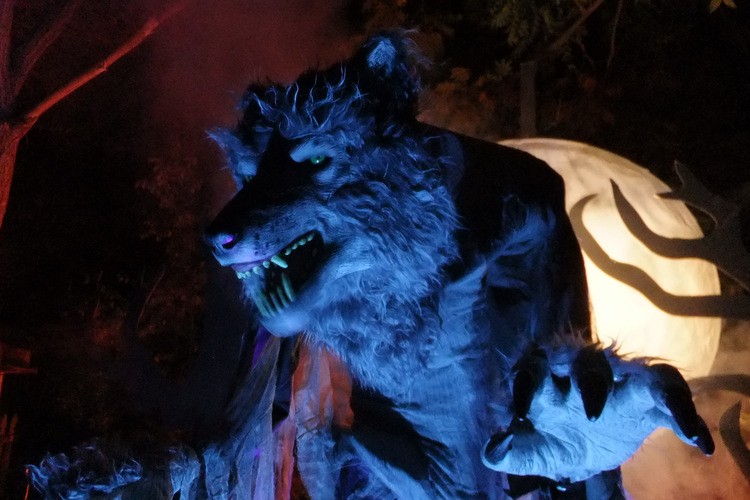 Once it was dark, we fired up the fog machine and started taking photographs. To the naked eye, the display was very fun. As the fog drifted across the scene it revealed the silhouettes of the tree and fence. The intense color and variety of shapes made for a very fun visual experience that worked not only on camera, but also in person. The full moon prop was a show stopper as well because it really tricked you into believing you were actually witnessing a huge full moon.

This year’s challenge was a lot of fun, a couple of fairly simple builds added up to a pretty amazing Halloween werewolf scene. Once again I thank The Home Depot for allowing me to participate in this experience, it’s always a lot of hard work but at the same time fun to get a taste of Halloween a bit early.

Shop The Home Depot’s online Halloween Decor Department for everything you need to decorate your home for Halloween and fall. Find more werewolves and other monsters at The Home Depot.